Burning Out in Tokyo
By Ronald E. Yates 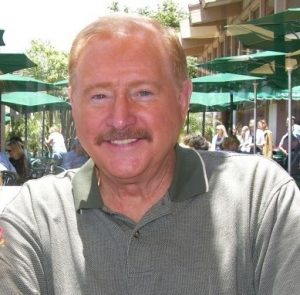 Clayton Brandt stood just behind the glass doors of the Ministry of International Trade and Industry building waiting for a let-up in the storm that pummeled the hot Tokyo pavement. Wisps of vapor rose into the air as the rain hit the warm ground.

He searched the eight-lane boulevard in front of the MITI building for an empty taxi. He knew it could be a long wait before an empty cab came down Sakurada-Dori. Thousands of bureaucrats glutted Tokyo’s Kasumigaseki district, and whenever it rained, it seemed like all of them wanted a taxi.

“Son of a bitch!” he said, his words echoing through the lobby. Two middle-aged Japanese bureaucrats standing nearby looked over at the tall foreigner. They understood that English phrase.

The two men looked at one another and then back at Clayton as if to say: “Yes, we can see it is raining. But is that any excuse for such a rude public outburst?”

Clayton sighed, opened his umbrella, and stepped out into the downpour. He turned right and hurried through the governmental heartland of Japan, maneuvering his 6-foot, 3-inch frame through the crowded sidewalk glutted with black and gray umbrellas. Sometimes the edge of an umbrella held by a much shorter Japanese man or woman slashed at his throat or slapped against his face. Whenever it rained, and the umbrellas came out, Clayton always felt Gulliveresque—like a giant trapped in a forest of undulating toadstools.

He looked up at the leaden April sky. The rain had drenched Tokyo for the past four days, covering the ground with a pink and white patina of delicate sakura blossoms. A slow rumble of thunder curled between the squat granite structures of Kasumigaseki. Clayton looked at his watch. It was four-thirty and the evening traffic was already crawling. He had hoped to get his story written and filed by six o’clock, but the briefing about Japan’s angry reaction to Washington’s decision to bar the U.S. government’s purchase of Japanese supercomputers had taken longer than usual.

The sky rumbled again, and bolts of lightning streaked overhead. A taxi pulled up outside the Ministry of Health and Welfare and was disgorging three Japanese bureaucrats in dark blue suits. Clayton closed his umbrella and dashed for the cab splashing through rivulets of water as he ran. The three men had barely climbed out before Clayton bolted past them and into the rear seat. He gave the driver his destination, closed his eyes, and rested his head on the seat back as the taxi inched its way back into the gridlock.

Every so often, his eyes opened just long enough to take in the somber Tokyo landscape. The perpetually gray skies of Tokyo didn’t do his already sepulchral spirit any good. In fact, very little seemed to buoy his disposition these days. He couldn’t help it. He felt depressed and probably a bit too sorry for himself. A few hours before the MITI briefing, he had suffered through another of those telephone “chats” with Max, the foreign editor of Global News Service in London about expenses and the need to cut back on costs.

The exchange ended with Max suggesting that Clayton not be such a “cowboy.” A “cowboy?” Why? Just because he was from Oxford, Kansas and not Oxford, England? It wasn’t easy working for a bunch of Brits when you sounded more like Garth Brooks than Sir Laurence Olivier. But he knew what Max meant.

He went over the notes he had hurriedly scribbled during the MITI briefing, searching for the lead of his story. His pen scratched heavy lines under the words “ill-conceived” and “studying our response.” Then he stuffed the notebook back into his bag.

“It’s over,” Clayton thought to himself as he watched the snarl of cars and trucks crawl along Uchibori-Dori through Kokyo-Gaien, the large plaza that fronted the walled Imperial Palace. It was as if today he had been forced finally to confront the inevitable mortality of his professional career; or at least of his particular brand of journalism. He was writing the same boring stories over and over again. Where was the challenge? The sense of accomplishment?

Clayton exhaled and gazed out the taxi window at the striated, ashen facades of drenched buildings. They reminded him of the mascara-smudged faces of women weeping at a rainy graveside.

He closed his eyes and nudged his mind away from the depressing Tokyo landscape. Soon it was obediently shuffling through old images of another, more beguiling Asia. It was an Asia of genial evenings spent beneath traveler palms; of graceful, colonial-era hotels in Singapore and Malaysia with their chalky plaster facades and their broad verandahs peppered with rattan settees and peacock chairs; of slowly turning teakwood paddle fans that moved the heavy night air with just enough authority to create a light breeze, but not enough to obliterate the sweet scent of evening jasmine. THAT was the Asia he missed; the Orient of the past.

For one thing, the passengers kept changing. And the conductors. And the engineers. But what did he expect? Wasn’t that the way the world worked? What was it that Tennyson had written: “The old order changeth, yielding place to new?”

Clayton shuddered. Was he the old order? Should he be yielding? Was he burned out?

Maybe he was becoming the old order, Clayton thought. But he wasn’t burned out just yet. And if there was any yielding to do, he wanted it on his own terms. The trouble was, the gulf of time between his past glories and the imminence of the callow, computer savvy handlers in the home office who controlled his destiny was becoming almost unbridgeable.

Most of his career predated cell phones and computers. For the computer literates at Global, his life’s work might as well be stored on some remote database. As it was, he existed only in yellowing newspaper clips, aging telexes, and letters of commendation that were kept in his personal file back in London. And nobody bothered to look at that stuff anymore.

What Clayton needed was another journalistic rush . . . A story he could get hold of and play like a newly discovered Mozart piano concerto. He needed something . . . Not to satisfy the yuppies back at Global, but to give him a reason to get back on the train and to leave the station again.

The taxi slewed to a stop like a wooden bathhouse sandal skidding along a wet tile floor. Clayton looked up. They were in front of the Kawabata Building.

Clayton fumbled in his pocket, handed the driver a one thousand yen note, and waited for his change. Then he bolted through the swirling Tokyo rain and put his shoulder against the massive glass and steel doors of the Kawabata Building. Unlike most of Tokyo’s modern structures, the Kawabata Building didn’t have sleek automatic glass doors that hissed serpent-like and opened automatically at the approach of a human being. It was a pre-war relic—an architectural throw-back with cracked marble floors and a fading art deco interior that had somehow survived the allied bombings.

The building’s deteriorating facade, which was the color of dead autumn leaves, seemed to glower at the world—like the rumpled brow of an angry old man. But the tumble-down building had an undeniable individuality in a country that too often prized sameness, and that was the reason Clayton liked it and had refused an offer to move into one of the new glass and steel “smart buildings” that soared over Tokyo’s Otemachi district.

He paused to talk for a moment with the old woman who operated the small grocery and newsstand tucked away in the corner of the lobby. From his many conversations with her, Clayton had learned that the old woman had operated her little concession since 1938 and knew the building’s history better than anybody.

She smiled as Clayton’s towering frame bent toward her in one of those peculiar half bows that Japanese make when they are in a hurry. Japanese could do it with a certain grace; but not Clayton. When this big foreigner bowed, he always looked like he was on the verge of crashing to the ground like a gingko tree struck by lightning. Nevertheless, she liked this gaijin. Ordinarily, she merely tolerated foreigners, but this one had a solitary charm. He was big, but not threatening; assertive, but not arrogant.

“So, Oba-san, Genki datta?” Clayton asked, combining the Japanese honorific for “grandmother” with the less formal interrogative for “how are you?”

“Genki-yo,” the old woman replied. Clayton picked up a package of Pocky chocolates and placed a one hundred yen coin in the old woman’s hand.

“Sayonara,” Clayton said as he turned and scuttled toward the bank of elevators.

Clayton smiled and nodded over his shoulder. The old woman was right. He was working too hard, and where was it getting him? Back on a train to oblivion?

“Oh, get over it,” Clayton thought as the elevator door closed. “You’ve got a story to write. Feel sorry for yourself AFTER you make your friggin’ deadline! Besides, what else do you know how to do, you old hack! Burning out is not an option.”

Thank you for supporting this member along the WATCH “RWISA” WRITE Showcase Tour today! We ask that if you have enjoyed this member’s writing, please visit their Author Page on the RWISA site, where you can find more of their writing, along with their contact and social media links, if they’ve turned you into a fan.

We ask that you also check out their books in the RWISA or RRBC catalogs. Thanks, again for your support and we hope that you will follow each member along this amazing tour of talent! Don’t forget to click the link below to learn more about this author: