Search Results for: a warning

‘A Warning’ by Anonymous: Book Analysis A Warning was published in 2019 by a senior Trump administration official. We now have the identity of ‘Anonymous’, Miles Taylor. Taylor wrote this book not to criticize or launch a vendetta but to bring out the facts of the USA's governing under the Trump administration from 2016 till 2019. Taylor journaled how the government worked … END_OF_DOCUMENT_TOKEN_TO_BE_REPLACED

‘A Warning’ by Anonymous: Book Review A senior Trump administration official penned A Warning. The book analyzes and puts forward in simple language the USA’s current President and what is at stake in the coming Election whose D-Day is on the 3rd of November 2020. The 2020 USA Elections may be one of the most crucial elections ever to occur in the 21st century. When the … END_OF_DOCUMENT_TOKEN_TO_BE_REPLACED

Mother’s WarningBy Fiza Pathan Oh! I have come across a sort of verbal arsenal,Mother of mine is ranting away about what I have done.About my ill-befitting behavior, with a Shah from the West.She abuses me as she escalates on my wrongs.Her curses are being sung in a sort of arsenic song.Mother of mine has dug my grave,Besides a scorpion filled well. But what must or can I do … END_OF_DOCUMENT_TOKEN_TO_BE_REPLACED

American Books, Reviews, and Analysis: Essay During this winter season, I hope to review and analyze American bookish content. In other words, I will be focusing only on American fiction and non-fiction books, essays, short stories, and everything literary by Americans on American themes. I have already posted many book reviews and short story analysis on the same. I have … END_OF_DOCUMENT_TOKEN_TO_BE_REPLACED 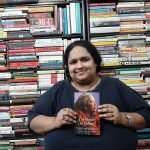 Scenes of a Reclusive Writer & Reader of Mumbai