Agnes’ Visitors
There was a loud pounding on the door. Jeremiah awoke with a start. He rubbed his eyes and stood near his straw bed, wondering where he was. His wife Agnes who was asleep next to him felt him moving and in her sleep thought it was a rat. At once Agnes gave an involuntary kick and down fell poor Jeremiah on his three children, who were sleeping on the mud floor in the same room.
“Ouch, my back,” yelled Jeremiah in pain as he fell on his three strapping sons. One of them felt suffocated and started to hit out at his father which made poor Jeremiah scream all the louder.
By this time the middle-aged Agnes with her large round stomach and parrot-beaked nose had woken up. Realising that her husband was on the floor flat on top of her sons, she said,
“By God, Jeremiah just get off my poor sons! Your weight will kill them!”
She jumped out of bed and tried to lift her husband to his feet, at the same time reassuring her son that he was not being choked so he could go back to sleep, which he promptly did. Agnes then hit her husband on the head and said, “Next time watch where you are falling. Thank goodness this time it was only on our sons, who have hard heads just like their father.”
Agnes then heard the pounding on the main door, which was now louder and conveyed urgency.
“Here now,” said Agnes pulling on her woollen white shawl around her shoulders, “Who could it be at this hour of the night?”
One of the sons groaned in pain, while the other next to him said aloud,
“Mother, tell the mules in the barn to shut up.”
“Mules, my idiotic sons,” said Agnes with a fierce glance at them. “Mules don’t know how to knock on doors.”
“This one seems to know,” replied the same son, opening his eyes and smirking at his mother with her grey disheveled hair. “Mother, right now you look like a witch from Assyria or Babylon.”
Jeremiah began to chuckle as he scratched his naked scalp and said:
“If before marriage I would have seen this look of your mother, I would have run twenty ‘towns’ away.”
Before he could complete his statement however, Agnes hit Jeremiah with her old wooden sandal on his back and this time he fell on a male guest who was a family friend.
While Jeremiah and the family continued to debate why it was not suitable to fall on people while they were asleep, the knockings on the door continued.
Agnes adjusted her nightgown and grabbing one of her half-sleepy sons, whose name was Josiah, dragged him over all the sleeping people on the mud floor in the courtyard, towards the main door. As they made their way towards the main door, poor drowsy Josiah who was only seventeen years old, stepped on the heads of two merchants, the tail of a horse and into some mule dung which made him sick.
“Mother, my feet stink; let me go to the back of the courtyard where the well is to wash the dung off them,” said Josiah in a very pathetic tone of voice.
“Not in the least,” replied his mother holding him even more tightly by the collar of his rough brown robe. “I would have allowed you to go if women could open doors late at night on their own. But since we have stringent rules about only males opening doors, you better come along with me; otherwise I’ll smudge your filthy face with that very same dung, which is on your feet.”
That quite settled the matter between mother and son. They reached the door and, with one arm, the strong Agnes threw open the door. She was quite upset with what she saw apparently, for she sniffed a bit and scratched her rough chin. Josiah, quite out of breath, looked over his mother’s large shoulders and saw a middle-aged man in front of him. The man was brown skinned and very handsome. He wore a dark red cloak over a long grey coat. His eyes were honey brown but full of worry and anxiety. 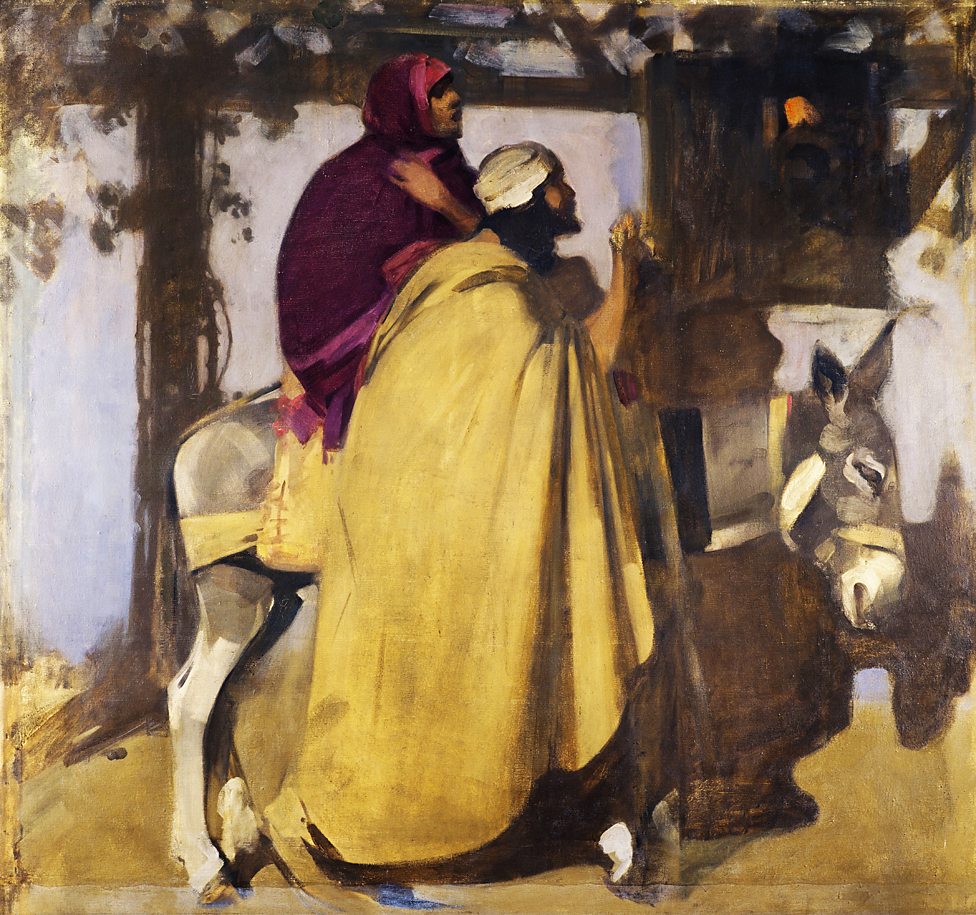 (Christmas Eve: ‘And there was no room for them in the inn’ (unfinished), c.1900-1904, by Arthur Melville | Scottish National Gallery | Photography by Antonia Reeve)
“What in blazes do you want?” asked Agnes in an irritated tone, “A fine fellow you must be, banging on my door and disturbing my beauty sleep! Now aren’t you going to say something or do I punch you in the face?”
The middle-aged man joined his hands in supplication and said:
“I beg of you madam, I’ll pay anything, anything that you quote, but please let my pregnant wife and me rest here for the night. We’ve been to every inn in Bethlehem and you are our last hope. Please have mercy. She is due any moment now!”
It was then that Agnes and Josiah turned to look behind the middle-aged man. Behind him stood a grey donkey, weary and tired. Behind the donkey on the ground right near the well of Agnes’ inn sat an enchanting little girl with a prominent stomach. The girl was in terrible pain and her sweat was drenching her indigo cloak.
“Please,” begged the middle-aged man on his knees, “give us shelter in your inn.”
To their shock, Agnes began to cackle. She threw open the door to her inn a little wider and motioned to the middle-aged man to have a look. The whole courtyard was packed with people and animals fast asleep, except for Jeremiah who kept tripping over all of them.
Then Agnes  with a crooked smile said, “You see, there is no room in my inn, especially no room in the living area.”
“I’ll take your barn or cattle shed,” suggested the middle-aged man with a desperate look in his eyes. Immediately, with pity in his young voice unlike his haughty mother, Josiah replied:
“Afraid not, Sir. Some Phoenicians have already taken them and they are with their cattle.There is no room, Sir, no room at all.”
“Of course there will be no room!” exclaimed Agnes in irritation looking at her son. “It’s the census, everyone from all over Judea and Galilee has come over here. Every inn and house is full. That Caesar gets weird ideas during the winter season only!”
“What will I do?” interrupted the middle-aged man almost losing his grip. “My wife is in pain I tell you! I’ll even take the roof.”
“Roof’s taken too Sir,” murmured Josiah. “The Medes came in last so we parked them up there.”
As Josiah pointed, the middle-aged man looked up at the roof to find a few filthy mud caked legs hanging down.
“Somewhere…anywhere!” shouted the middle-aged man, beating his chest with his knuckles. Agnes in vexation was almost going to close the door when she suddenly looked again towards the pregnant young girl who looked no older than fourteen years of age.
The pregnant girl’s hair was golden, very uncommon in their part of the world. Her skin would have been fair as milk but at that moment because of the pain, she was quite pale. Her eyes were sky blue and moistened with pain. However, what really caught Agnes’ attention was the unearthly glow that surrounded her at that dead hour of the night and it was not even a full moon night.
Agnes, quite perplexed, nudged Josiah to follow her. She came closer to the pregnant girl and looked all around her to see where the source of light was coming from.
“Mother, mother look up at the sky!” shouted Josiah tapping his mother’s bulky shoulders in a frenzy and pointing with his left hand towards the dark night sky. Agnes looked up and couldn’t believe her own eyes for above in the sky, there was shining in all its glory, the most glorious star she had ever seen. It was three times bigger than the other stars in the sky and its glow was only focused on the pregnant girl in a silvery sheen. Agnes opened her mouth wide, but could not say a word. It was then that some humanity that had been missing in her life for so many years, suddenly awakened. It was like the bursting of the cocoon of a caterpillar to give birth to a butterfly.
She gulped down her emotions as she said, looking towards Josiah her son (who looked as dumbfounded as she was), “Josiah, there is that old stable of ours which we now use only to make the dung cakes. Isn’t there some warm straw there?”
“I’ll take them there,” exclaimed Josiah. He saw and he believed. He needed no justification. Josiah then tenderly helped the pregnant young girl to her feet with the aid of her husband and led them towards the old stable. Agnes, who stayed behind, said to herself in a mellow voice, “I’m sorry my Lord, the God of our ancestor Abraham but…but there really wasn’t any place in the inn.”
As soon as Agnes said these words, Jeremiah came up to her saying:
“Who were those fools irritating us in the middle of the night?”
He got a slap on his face for that statement and was ordered to go fetch some warm water while she would get some fresh straw from their own cattle shed…a baby was going to be born.
Copyright © 2012, Revised edition 2015 by Fiza Pathan
(Agnes’ Visitors is from Treasury Of Bizarre Christmas Stories)
(Image: Christmas Eve: ‘And there was no room for them in the inn’ (unfinished), c.1900-1904, by Arthur Melville | Scottish National Gallery | Photography by Antonia Reeve)
Image courtesy:
http://www.bbc.co.uk/programmes/articles/4Rmn90nCDNzZ6jQfN2QJdxJ/britains-favourite-christmas-paintings