An Interview with Author Robert Evert – ‘The Riddle in Stone Series’

Robert, here are the questions for the interview. You can answer a few of them or you can answer all of them, whatever you are comfortable doing. Ready then, here we go:

When did you decide that you wanted to be a writer?

I’ve always loved writing.  I used to write these weird stories in third and fourth grade…everything from a “Buck Rogers” kind of character to a 1950’s private eye named “James Rich.” Kids used to sneak into my desk to read them. It’s just something I feel I have to do.  Some people run. Some people chain smoke. I write.

I’ve been trying to write a book since eighth grade, but it wasn’t until a couple years ago I really took the craft seriously.  I read books on how to write (particularly Stephen King’s book “On Writing“) and things just took off.  I got an agent. She convinced a publisher to give me a three-book deal.  And here we are!

Which are the books that you generally read?

I like to read just about anything, but I tend to gravitate to history or biographies. Learning about people helps me develop characters. I dislike books that are only about the story. Give me tales about real people, or fictitious people who feel real, any day! Nothing’s better than a book with characters you’d like to really meet.

When did you start writing ‘The Riddle in Stone Series’?

The short answer is two and a half years ago.

The long answer is… I really didn’t know I was writing a book, let alone a series. You see, about three years ago, I finished my first novel-length manuscript. I sent query letters to a bunch of publishers and agents and, to my surprise, a lot of them wanted to read it! Unfortunately, after reading the manuscript, nobody wanted to buy it.

One agent sent me a form letter rejecting the manuscript. Along the bottom she wrote, “Exceptional idea, poorly executed.” Basically, I had a good idea, but I just couldn’t write.

So I started practicing. For at least five minutes every day, I wrote about this guy named Edmund. I didn’t know who he was or what he wanted. I just had him walking down a path away from his hometown. Somehow, it turned into Riddle. Go figure!

Why did your main protagonist have to be a middle aged ‘fat’ person like Edmund & not a regular handsome & strong warrior?

I really enjoy reading fantasy, but (in my opinion) there are a lot of bad fantasy stories out there. I get tired of the clichés—the muscle-bound, manly-men, heroes who are smart, rich, good-looking, and can do everything. I just can’t relate to them. Sometimes I read fantasies and I actually root for the bad guys because I hate the protagonist so much!!!

I wanted to write about somebody who was real. And Edmund emerged. I had him stutter because my son had a speech impediment and I wanted him to have a hero who spoke like him.

What does the character Edmund mean to you as the protagonist of your story?

Hmmm. I don’t know. I suppose what really ties me to him is his quest to become happy. He doesn’t want to be rich or famous (at least not by the end). He just wants to find happiness. I can really dig that. I hope we can all find true happiness before our stories end.

Edmund leaves his village Rood to set out on an adventure to change the way people perceived him. Would you have done such a thing if you were in Edmund’s place?

Oh no. Not at all!! The idea of just leaving by myself would terrify me. I wouldn’t be able to sleep knowing I could wake up staring at the business end of a sword … or worse. And then the bugs and crappy food! Give me a soft bed, a hot cup of tea, and a terrific book!!!!

Then again, if I had a dog like Thorax, maybe I would! No.  Soft bed, tea, and book win.

Thorax the faithful dog does not leave Edmund’s side to the very end. What relationship do you share with animals?

I love animals. When I was a kid, I didn’t have many friends. I was a very lonely and depressed child. So I’d sit and talk to my gerbils and dog. Kind of pathetic, eh? I suppose that’s why I appreciate the companionship pets and non-human animals can give us. They don’t get enough credit for all the wonderful things they bring to our lives.

Your story is based on a continent than is similar to the medieval ages of Europe with a bit of a twist. Why did you choose such a setting for your story?

Boy, that’s a good question. I don’t know. I think part of it is that I was lazy. My world is the stereotypical fantasy world…swords, knights, goblins, etc. The difference I wanted to make was that the story was about the characters, not about an epic quest or the world’s mythology. You can take Edmund and put him into any environment and I think he’d still fit. He’s just a guy who is looking to find happiness and figure out who he is. People like that exist everywhere.

Why do you prefer a lot of gore & blood in your stories?

The funny thing is, after Riddle got published, somebody described it as a “dark fantasy.” That really shocked me. I didn’t intend on writing anything dark. Not in the slightest. It just turned out that way.

The way I look at it—bad things happen in the book because that’s what would have really happened given the situations Edmund finds himself. You don’t get captured by goblins and have a tea party. Well, actually, Edmund does, but you know what I mean.

I really dislike books where the protagonist goes through hell and comes out without a scratch. That’s not life. Sometimes bad things happen and you have to either deal with it or stop living.

Pond Scum a character in your book is optimistic even after spending ten years in captivity of the Hiisi (goblins). Are you an optimistic person?

Absolutely not!! LOL. I have some issues with depression and I’m not exactly a “people person.” I try to be kind, but I don’t have much patience with people.

I’m Edmund…middle age, grumpy guy who likes books and doesn’t understand people. Pond Scum is my wife…always happy, always positive, always seeing the good in people. Edmund needed somebody to show him how to become happy. Maybe we all do.

Thorn the elf in your book tells Edmund to kill him to end his suffering. What are your views about euthanasia?

Hmmm. I don’t want people to suffer—but I’d have a very difficult time ending somebody’s suffering in the way Thorn wanted. I sat in front of my computer for a long time, debating what Edmund should do. It was a difficult decision for me.

Edmund after escaping from trouble wants to return to the same place of danger where he has escaped from for the sake of the one he loves. Do you think that Edmund truly loved Molly?

Another really good question. Yeah, I think he did. But it wasn’t a healthy love. It was all one-way. In the end, hopefully he found the kind of love he needed.

What does true love mean to you?

When I was dating my wonderful wife, I was sneaking out of her house after she had fallen asleep on the sofa. As I was gently closing her front door, it just kind of hit me—I realized that I loved her and that I didn’t want to keep leaving her every night. It was like a bell ringing in my head. One moment there was the old world. Then next…there was everything worthwhile. What’s the lyric? “I have no more than I did before, but now I have all that I need. For I love you and I know you love me.” That about sums it up.

Love is. That’s all I really know. And that’s good enough for me.

Who is your most favourite character in your book & why?

Kravel. Definitely! There’s just something about him. He knows who and what he is and is completely at peace with everything. He also isn’t the stereotypic antagonist. He always makes me smile. I’d love to write a book just about him, but my agent doesn’t believe people will buy a book about a “bad guy.”

There are three books in the ‘Riddle in Stone’ series. Are you planning on writing more of them?

I’d LOVE to write more. But, right now, my publisher wants to see how the first three books sell. It’s a business and they have to make money. So if the books don’t sell, there won’t be any more in that series.

However, I’ve started a new series. Hopefully that’ll catch on with a publisher and readers!

Describe yourself in one sentence.

Painfully aware of who I am.

Where do you see your writing career five years from now?

I’d love to keep writing, but as I said writing is a business and if your books don’t sell, you end up writing for your friends and family—which, I suppose, wouldn’t be too bad. But I’d really miss meeting all of you readers. Hearing your thoughts and ideas is really wonderful.  Talking to all of you is the only way I can improve as a writer—so feel free to drop me a note. I’d love to hear from you!  Thanks for reading!  —Rob Evert

Books by Robert Evert on AMAZON – The Riddle in Stone Series 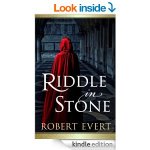 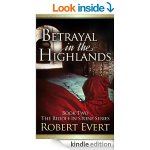 Read my five star review of Riddle in Stone- Book One

The Merchant of Venice Act 3, Scene 3