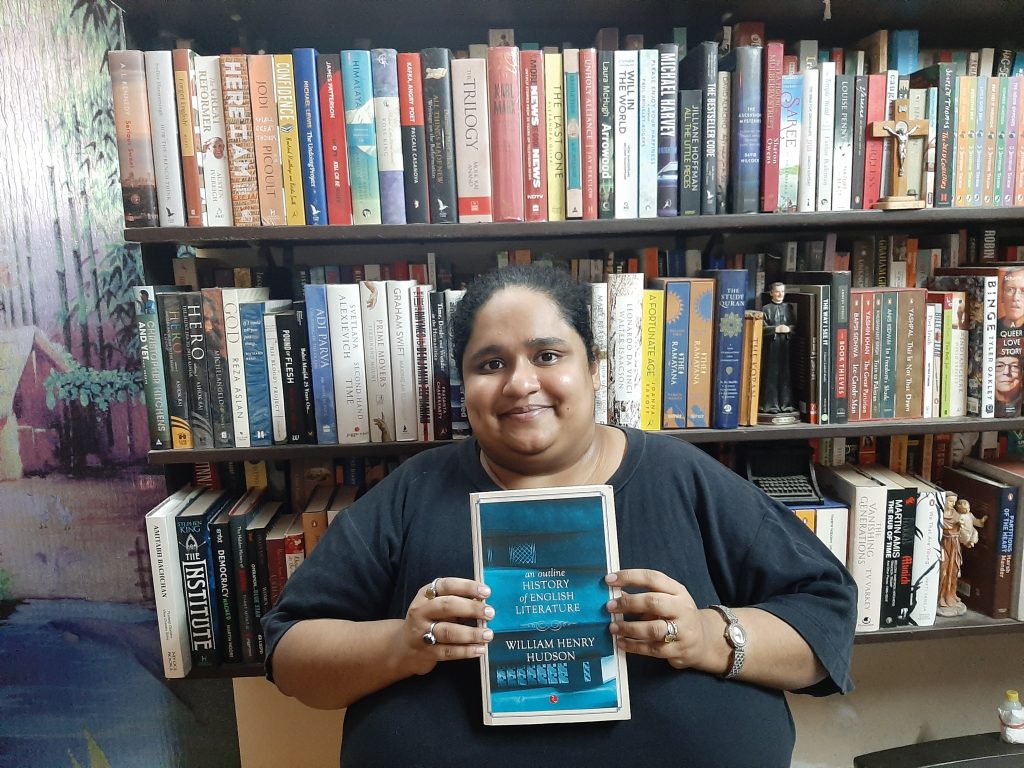 An Outline History of English Literature  is a short but comprehensive book about the different literature schools and movements. However, the book is from the British perspective and mentions literary works and figures only until 1955. It is a good resource material for beginners in academic studies and literature analysis. I bought this book from my favorite bookstore Kitab Khana. Most of the books in my collection are from Kitab Khana, which is considered the best bookstore in Mumbai. I purchased the book in the year 2015 when Rupa published it. To know more about Kitab Khana, read my memoir Scenes of a Reclusive Writer & Reader of Mumbai. This delicious bookish book is available from Amazon or my products page. Hudson’s book is a small book on a vast topic involving the various books and writers that make up the English literature we know today.

I gave the book four stars on Goodreads. In a very concise manner, Hudson has analyzed the different time frames in English literature development. He starts with the time before Chaucer and ends with the dawn of Modernism. He believes that literature is influenced by the elements that entered civilization during that age when conceived and penned. I agree with him on that point. I have observed that books have a relationship with readers both before and after the book is written. I read a similar book about how literature showcases a good writer’s influence on those who come after them. The book’s title is How to Read Literature  by Terry Eagleton. I’ve reviewed the book on my blog. You can check it out here. Where Eagleton goes into criticism and literary analysis, Hudson gives us the bare minimum knowledge about different books and a set of timelines when they appeared on the scene. I benefitted a lot from those timelines presented in Hudson’s book, which gave me a good idea when and where a book was published. The timelines are like history timelines, but are in an easy to read format, and give readers additional information about the different revolutions, inventions, scientific discoveries, etc., that took place when a book or set of books was published. It gives us a deeper understanding of how the ‘market’ was like when the book was first published and its effect on civilization, especially in Britain.

These are the periods that are touched upon briefly in this book:

Each of the above periods is analyzed with the required historical background information needed to understand why these books’ writers wrote the way they did and under what circumstances. Hudson connects the dots between the ages very well, and his writing style is easy to follow. I highly recommend this book to all beginners in literary studies and studying the historical periods in English literature. Hudson is brief and to the point. He makes one understand right at the outset that he would analyze the literary periods according to the chronological order of studying history. Hudson mentions the rise, growth, and then decline of the many schools and movements of writing. He has the quality of preciseness in his writings, which will appeal to even a person not well versed in the English language.

Each of the periods mentioned above is categorized by the books that significantly impacted the literary public. It is then neatly divided into the various books published at that time, which did not have such a lasting impact in the overall sense but were still famous and noteworthy. Hudson appears to be well versed with the ancients, and his analysis is very lucid.

Hudson is exact, to the point, and not a braggart. He doesn’t make a comedy show of his knowledge but instead is precise in disseminating his information. Hudson is very well-versed in the earlier English periods and doesn’t think much of the Victorian era, which happens to be my favorite literary period. That one star was deducted in my review on Goodreads because he tried to hastily tie up the Victorian period in a nutshell, which I think was the only inadequacy in this otherwise well-researched book. Another reason why I deducted the star was that my edition of the book had no bibliography. However, I believe it was the publisher’s error. One can’t also ignore the fact that Hudson passed from this life in the year 1922. Most probably, he couldn’t analyze the Victorian era of English literature as some erudite authors and reviewers do these days. It was, however, a pleasure to read the book. I would have finished it earlier, but I happened to be reading three other books, which took up most of my reading time.

The book is concise and precise. It won’t take you long to read, but for a non-literary student, it can be a bit heavy. So, do not read it with a cluttered mind if you want to assimilate all the book’s details. If you are an English literature teacher and want to develop your knowledge on the subject, especially for younger readers, then I highly recommend this book to you; it will enlighten you. If you are a teacher and want to introduce your students to good literature, this is the book you should be making them refer to as study material. I have penned an award-winning non-fiction book titled Classics: Why and how we can encourage children to read them. You can buy the book on Amazon or the products page on my blog. It will aid you in inculcating a love for reading quality literature in younger readers. I have chiefly dwelt upon Victorian writers in my book. So, it will cover the lacunae in Hudson’s text, but only on an elementary and modest level.

I hope to read more books by Hudson soon. It was a joy to read this book, which reads like a fascinating textbook. I have many literary texts in my office-cum-writing hut, which I hope to read and review for you on my blog. Indeed, this book was tiny but tried to convey a lot of important information about literature as a subject for study. Go and get it now!