About the Author:
Judith Barrow has an MA in Creative Writing, B.A. (Hons.) in Literature, and a Diploma in Drama and Script Writing. Her short stories, poems, plays, reviews and articles have been published throughout the British Isles, notably in several Honno anthologies. Her play, It’s Friday so it must be Fish was performed at the Dylan Thomas Centre in Swansea. A short film was made of her play, My Little Philly, and toured the Indie Festival. She is also a Creative Writing tutor and runs workshops on all genres.
When she is not writing she spends time doing research for her writing, walking the Pembrokeshire countryside or organising the letting of their holiday apartment Saddleworth House.

You come across to me as a person who really loves to write and want to make people write. Have you always been this way? I am especially trying to refer to your childhood and teenage years.
For various reasons I was rather a solitary child. From the age of around eight I walked with my dog around the hills and fields where we lived. The scenery was inspirational and I I would write short poems and pieces of descriptive writing in a notebook that I always carried in my coat pocket. I shared them with no one; my family wouldn’t have thought them any particular interest. It was only later, in my teens, in the school English lessons that I felt able to read out anything that I’d written.
Can you please give my readers a brief description of your academic and creative writing achievements?
I have an MA in Creative Writing, B.A. (Hons.) in Literature, and a Diploma in Drama and Script Writing. I’ve had short stories, poems, plays, reviews and articles published throughout the British Isles, three books published by Honno, an independent publisher and I’ve Indie published one book. I’ve had one play performed on stage and one made into a short film.
You have got a great foundation in literature and creative writing from various institutions. Can you tell me of a few professors, teachers or coaches who really influenced you to write the literature you write till this day?
There was one English teacher who taught me in my teens, a man called Leslie Ellenore, who always said that, one day, he would be reading my books. He left to live in New Zealand and I never heard anything about him after that. I’ve often thought of him. I didn’t stay on in school for higher education so I was an adult when I took my A level English Literature over one year. I’d totally forgotten how to approach critiques of writing so I managed to write a whole piece on T S Elliot’s The Love Song of J.Alfred Prufrock without one single quote. I think if the tutor, a lovely lady called Lindsay Radion, had made even one derogatory remark at my attempt I would have walked away. But she didn’t and I went on to get one of the highest marks in Wales that year. I was voted Pembrokeshire South Adult Learner of the Year. That was a proud moment. But I was soon brought down to earth by my young children who told everyone I’d learned to read and write. It was later I gained my higher qualifications.
What came first:

Judith Barrow the writer, for sure.
Which is the book you have recently written and how is this book special for you?
Living in the Shadows is my last book of the trilogy. It’s special because I managed to round off the Howarth family’s story in a way I felt was right.

Can you please give my readers a glimpse into the world of your main female protagonist Mary, and what she means as a character not only to you but also to every reader who wishes to read your books about her?
I like Mary Howarth; she evolved even before my first novel, Pattern of Shadows, began to emerge in my thoughts. She’s a civilian nurse in the hospital attached to the prisoner of war camp in WW2 and loves the work there; she only sees the prisoners as injured men and is a compassionate caring woman. And she’s strong; despite the hatred of her job by one of her brother and her boyfriend, Frank Shuttleworth, she refuses to leave. Besides she has no real choice; she’s the main breadwinner of her dysfunctional family, the one they expect to always be there to pick up the pieces when things go wrong. All her life she’s been loyal to them; she accepts the weight of their demands. She toes the line. But then she meets and works alongside Peter Schormann. Peter is a German prisoner and also a doctor who has been seconded to the hospital. For once Mary throws off the edicts of her life. The following years are harsh, even brutal for her. But she remains a caring, strong woman. And still the one that the rest of her family depends on. 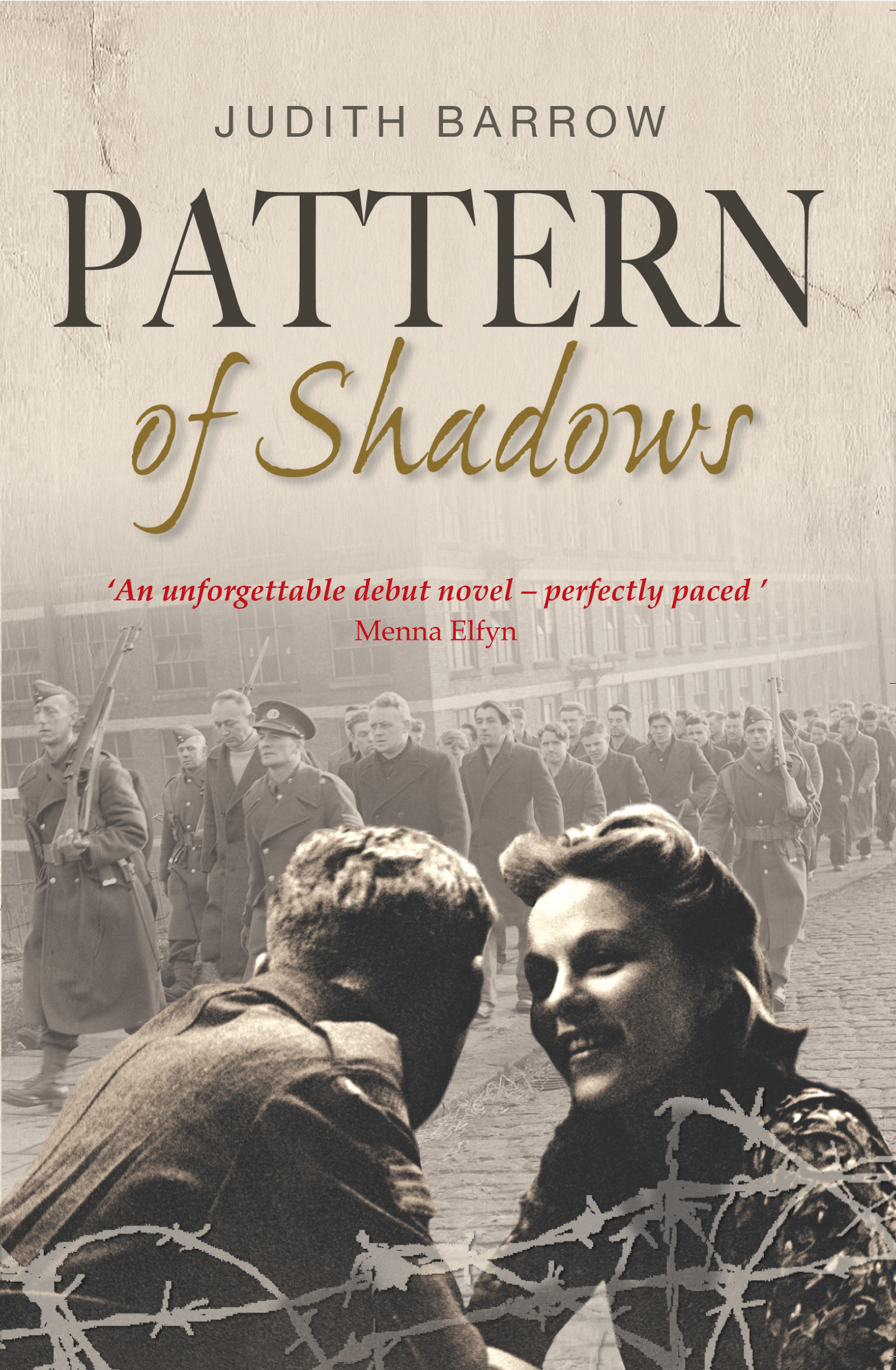 When you wrote your first book Pattern of Shadows where Mary Howarth was your main character, did you know that you were going to make a series of it or not?
No, not at all. In fact the first draft ended completely differently. It was only when the final edit was complete that I knew her story wasn’t complete; I needed to go on.
How do you feel now that it has become a series?
Very, very happy. Satisfied. Yet also sad. I didn’t feel I could let go of the family. Which is why I’m now writing the prequel.
In Pattern of Shadows there is a mention of a character called Frank Shuttleworth who turned out to be Mary’s worst nightmare come true. Have you ever had to encounter any ‘Frank Shuttleworth(s)’ in your life or career?
Yes I have, and writing about Frank Shuttleworth really helped to put an old situation into context. Sometimes it’s possible to hold on to bad memories because you don’t want to confront them just in case they affect the place your life is in at the moment. Seeing the words that evolved in some of the scenes between Mary and Frank actually on the screen and then in the book helped me to reconsider and recognize I will never have to deal with those bad memories again.
You seem to be very influenced by the medical stream in most of your books. Why is that so?
As far as the trilogy goes I think I answer this in your next question.
For Silent Trauma my answer is completely different and, I’m afraid, very long.

You have based your first two books of the Mary Howarth series, that is, Pattern of Shadows and Changing Patterns directly on the Second World War. How did you manage to research on this topic and how long did it take?
I never intended to write about the Second World War. It’s something I’ve talked about a lot. I was visiting my mother who lives in the North of England and was researching in the Oldham Archive Library for a story I intended to write. As is usual for me, my research led me from one thing to another and I discovered that one of the first prisoner of war camps for German prisoners in Britain was a disused cotton mill in Oldham called Glen Mill. It was then I realised I’d found a perfect setting for my nurse, Mary, my strong character who’d lived in my head for such a long time.
Who has been your greatest support where your career as a writer and teacher is concerned?
My husband, David. He’s supported me in all I’ve decided to do. I had breast cancer twenty years ago and, once recovered, decided I wanted to gain some qualifications and then to write full time.
What will be your future ventures? What is the next book you are working on? Let my readers know your plans.
I now tutor five classes for Adult Lifelong Learning for Pembrokeshire County Council; this next year we’re writing memoirs and short plays. It’s great fun. And I’m writing the prequel to the trilogy, working title, Foreshadowing. I’m also on the final (hopefully!) edit of a book entitled The Memory, the story of a woman who lives with her mother, an Alzheimer’s sufferer. It’s a novel with a twist at the ending.
Describe your own writing style in five sentences.
Hmm, difficult! I write in the only way I know how. I’m often told by readers that know me say they can hear my voice as they read. My style has been described as poignant, gritty, with detailed observations and true to sense of place and era. I think, perhaps, I should leave it to the readers to decide.
Thank you ma’am for enlightening insaneowl.com and its followers about your work as a writer. Continue the good work and all the best for your future ventures. I do hope that we may be able to speak through the medium of my blog once again in the near future. Warm regards from Fiza Pathan.
To connect with the author, click on the links below:
Facebook: https://www.facebook.com/judith.barrow.3
LinkedIn: https://www.linkedin.com/in/judith-a-barrow-02812b11
Twitter: https://twitter.com/barrow_judith
Pinterest: https://in.pinterest.com/judithbarrow/
Google Plus: https://plus.google.com/+JudithBarrowauthor/about
About me: https://about.me/jbarrow
Blog: http://judithbarrowblog.com/
Her books are available at:
http://www.amazon.co.uk/Judith-Barrow/e/B0043RZJV6/
http://www.amazon.com/Judith-Barrow/e/B0043RZJV6/
Copyright © 2016, Fiza Pathan