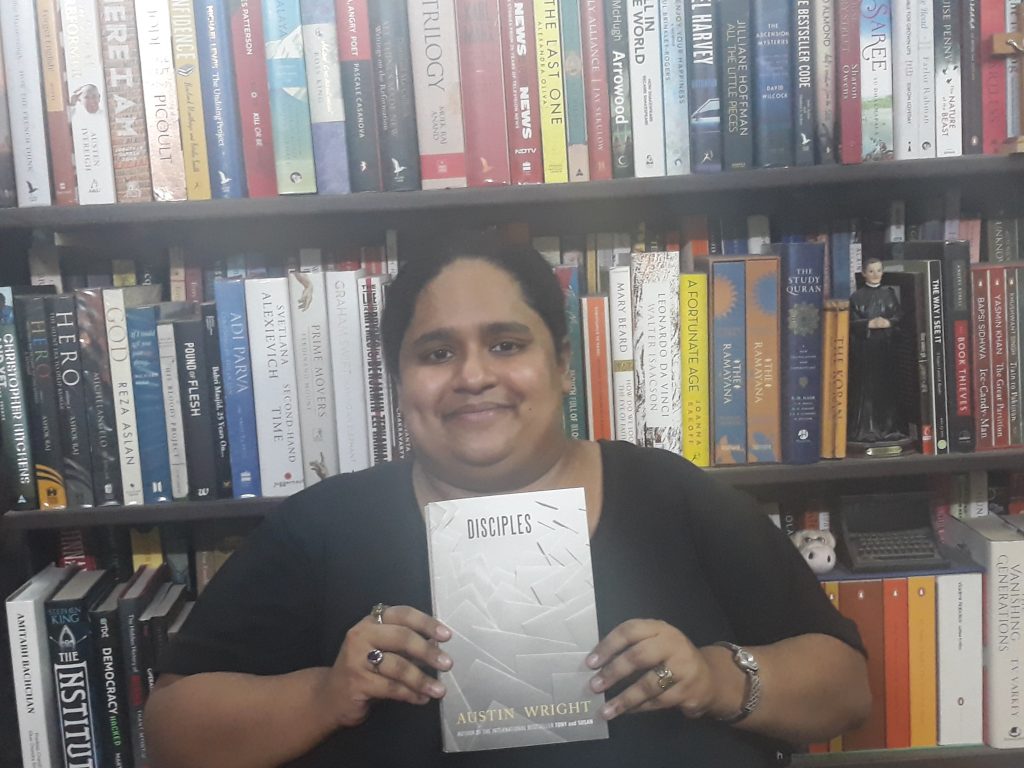 Disciples by Austin Wright is a book about the reason why people need someone to lead them in spiritual life. It’s about dependence on a mentor or a spiritual guru who can think for a ‘disciple’ and lead them to a more fulfilling life. It is a book which ultimately comes to the bare fact that disciples and gurus are not only seen in spirituality but also in other spheres of life like science, which is mostly a great opponent of religion and in the belief in the ‘God factor’. Religion, spirituality, science versus religion, a belief in a universal God, discipleship, the mentoring of a disciple, leading lives apart from society, religion versus philosophy, spirituality, religious frauds and tricksters, are some of the main topics dealt with here in this wonderful fiction book titled Disciples. I enjoyed the book but didn’t fall totally in love with it. Still, it was a good book with a very unique set of characters that have been dealt with in a way that I have personally never seen or read before. Austin Wright was an American writer who passed away in the year 2003. He is the famous writer of the contemporary classic Tony and Susan.

I bought this book at one of my favorite bookstores in Mumbai. The bookstore was ‘Wayword & Wise’ and I bought the book Disciples there at the end of 2019. I picked the book to read a few days ago and I was taken aback by the excellent content of the book. I realized that Wright had used a sort of invisible ‘web’ connecting the ‘disciples’ and their many ‘Gods’ or ‘mentors’. The story starts off plain and simple: Harry Field, a seventy-year-old professor of the history of science is babysitting his granddaughter when her estranged father Oliver arrives suddenly and tricks the grandfather. Oliver kidnaps his one-year-old baby daughter and takes her to Miller Farm where a spiritual leader resides who calls himself ‘God’. There is also a portion in the book where this religious leader echoes the words of the Bible saying that he indeed is the Lord and God incarnate et al. This man is Miller, a failed Protestant Priest who has evolved a sort of religion of his own and has herded around forty disciples. These disciples stay first on Stump Island but later transfer themselves to Miller Farm where they live apart from society. One can even say that they had rejected society. It is to this place with its bizarre band of people that Hazel, the baby, is taken to.

You may be fooled by the synopsis of this book and think this is a thriller and you would be wrong. This book is literary fiction from beginning to end. I won’t say it’s the best literary fiction I’ve read so far, but it meets my credentials of being a good enough read. Trouble is that I’ve read so many books in my lifetime of thirty-one years that the expectations just keep on getting higher and higher. Invariably, this is another subtopic of the book, our yearning for ‘more’ when actually time is invariable and according to the charlatan Miller, there is no ‘beginning’ and no ‘end’ because everything is existing together.

Miller is an extraordinarily brilliant man. If not for his barbaric ways and promiscuous behavior, he would have made a very good spiritual guru. However, he calls himself ‘God’ which appealed to me. I wanted to read this book and see why this cartoonish Miller figure with one false eye had come to such a conclusion. I wanted to know whether he was a trickster or a real guru. Apart from his phenomenal intellect and his spiritual amnesia, he is certainly no ‘God’, or is he? That’s what you will have to find out. Do read this book. Don’t read it with high expectations if you are a regular reader of literary fiction but read it for the following:

I read this book at a fever pitch; the pages just kept on turning themselves. Even though I had a very tight teaching schedule the entire week, I made time to read this book and I’m glad I enjoyed it. The book is a good read for a free weekend. The book needs to be read carefully so don’t try reading the book in a tense situation or while traveling.

I will analyze this book titled Disciples sometime soon. I hope to get my hands on Austin Wright’s other books, especially Tony and Susan.