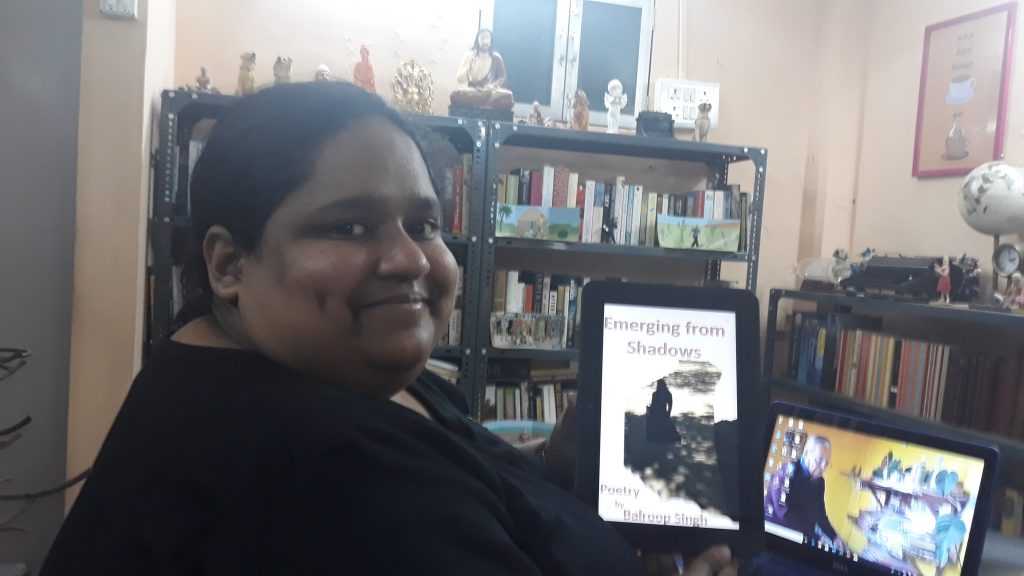 After I read ‘Timeless Echoes’ by Balroop Singh, I was so in love with her therapeutic poems, that I went ahead and bought another book of poems penned by her in a span of a few hours.

This poetry collection is about self-realization or self-actualization where we learn to come to terms with the things that have not gone well with us, and we come out into the light. It also encompasses a part of yourself coming out into the light. There is a lot of beautiful shadow play here, dark and light play in these mystical poems reminding me of these black and white movie directors who played well with shadows in their cinema. I especially think of Guru Dutt, a very famous director of black and white Bollywood cinema of the 1950s, but whose life ended in tragic circumstances.

But coming back to Balroop Singh, her poems in this collection are also therapeutic but in a different way. There are a lot of ‘aha’ moments that you will feel here in these enchanting poems. Some of my favorites were: ‘Breaking Free’, ‘I Give Up This Chase’, ‘I Am Enough’, ‘Confounded Yet Calm’, ‘The Secret of Being Alive’, ‘Follow The Sunshine’, ‘Dreams That Never Were’, ‘Fortified Beauty’, ‘In My Grave’, ‘The Invitation’ and ‘Divine Light’. Do these titles interest you? Then what are you waiting for, go ahead right now and buy this book of poems on your Kindle!

As you can see, the whole set of favorite poems I have mentioned go from dark to ‘coming out’ to redemption or salvation, whichever you prefer. There is unease but calmness, there is no violence or self-harm which is so unlike the poetry I’m fond of writing. But no, there is this fact in Balroop Singh’s poems that whatever befalls, I will still stay calm and hold my composure. The only time you lose that is when you feel you can’t keep the feeling in anymore and you have to come out of your shadow to redeem yourself and others with you. Balroop manages to heal the wounds in the gap between hidden and revealed. She does it with the gentleness of a grandmother or gentle mother, administering to her favorite child who is ill; pure devotion which makes her ministrations felt even in her sublime poetry.

Coming to myself, I would like to talk about four poems from this collection that were therapeutic for me. They are:

Where ‘Breaking Free’ was concerned, I really felt like that mystical bird mentioned in the poem and wanted to really ‘take off’ from my wearied state to a place beyond all cares and worries. I am a highly professional workaholic thirty-year-old single woman living in Mumbai, India. There are a lot of things that get me down. Society does not accept a person like me, who does things that society and culture, do not AT ALL approve of, especially in the volatile India that we are seeing now. So basically though I seem calm, cool and perky, I still sometimes would give anything to be like that bird and just ‘fly into the blue sky’ and just leave this mess that is my India. But I can’t, which leads me to the next poem on my list of favorites penned by accomplished poet Balroop Singh.

Where ‘Follow the Sunshine’ is concerned, I find myself in darkness but like Balroop says in her poem, even though I am calm in this darkness, I need consciously and unconsciously to seek the light. For that I have to ‘follow the sunshine’ which will heal me. It will help me to realize that in spite of all the darkness around me and within me, there is something good; there is the sunlight. This was absolutely a poem that healed me which I keep reading as I go on with my day ever since I’ve discovered Balroop’s miracle poems. My country is going through a lot of turmoil, we are not at peace. I am also a part of this darkness. I can’t see anything but dark shadows in the form of communalism, casteism, regionalism, dogmatism, etc. But one day, truth will come to light in the form of sunlight, and then hopefully our nation will be healed finally, and I’ll be able to speak freely without any fear of the moral police.

Next up is ‘In My Grave’ which I really felt that the esteemed poet was talking to me directly through the power of her mesmerizing poetry. The poem talks about a person resigning to her lot. She is now buried in a grave and is happy about it. I too am buried in my work and in my books. My books, especially those I read more than those I write are my grave. I’m happy to be in this grave because actually, nothing in the real world seems attractive to me anymore, especially all this hate. Why so much fake news? Why so many lies that are being believed? What is truth? Who still believes in the truth? I do, that is why I have dug a grave for myself in the form of books and have buried myself there, because I’m not a fighter; I am only lethal when I have a pen in my hand. But I’m not part of the living, I’m part of the living dead. Others live the real life as mentioned in Balroop’s moving poem. I’m just lying here quiet as ever, waiting for the storm to blow over.

And finally, there is ‘Divine Light’ which is very touching, spiritual and full of merciful grace. Balroop here mentions coming out into a garden, and as a garden lover and nature lover, I too felt that the best way for a person like me to ‘come out’ was to enter my garden. There, as penned by the masterful stroke of Balroop, I’ll learn to forgive, gain enlightenment because of it and then remain in the light where once there was darkness. I’ll be with my old friends who will now forget old qualms. We will journey this race of life into a walk down a garden path. This poem gave me hope, a hope that I will keep in my heart forever. Though I am yet asleep in my grave, I will one day ‘wake up’.

I highly recommend the healing and transformative poems entitled ‘Emerging from Shadows’ by Balroop Singh. She is a poet you will have to look out for. She is going to create a community of healing with her therapeutic poems. I really look forward to reading more of her books in the near future. Do buy a copy of her Kindle book and support her work.