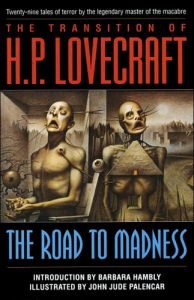 I must admit that this was the first time I actually came across the author H. P. Lovecraft. This book I found at the Strand Bookstall in town after it fell on my head as I was rummaging through a bookshelf containing some other great books on philosophy.

I was taken aback when I read on the back cover of the book that Lovecraft had inspired many of my own favourite authors of the macabre like Anne Rice, Stephen King & Clive Barker. As I poured over the stories at night UNDER my study table with the table lamp on, I was transported to a realm quite different from my own understanding of terror & fantasy. Lovecraft’s ideas were not only macabre but also quite morbid & blood chilling. True that his works are steeped in grand descriptions which normally puts a casual reader of, but a true lover of literature & horror will certainly realize after reading Lovecraft’s works like ‘At The Mountains Of Madness’, ‘Reanimator’, ‘Imprisoned With The Pharaohs’ etc. that the descriptions are all meaningful to completely realize the actual horror behind it all.

As Barbara Hambly stated, H.P. Lovecraft struggles to bring out his ideas to the reader….it is his idea that is powerful & extraordinary. His pseudo – Poe short stories take on another turn as they get more original & more bizarre as the years go by. Lovecraft’s characters too keep on undergoing transformations & at times reappear in other stories. He in the bargain creates a niche for himself in the horror & fantasy genre which no one can rob.

He is excellent as I have observed in first person accounts of the story, making the reader grip the book tightly in a cold sweat as he administers the opiate of fear into our system….almost like his warped character Herbert West does by administering a special powder into the veins of dead bodies or organs to bring them to life in the ‘Reanimator'(this was better than Frankenstein). Most of Lovecraft’s protagonists I have observed are men (it’s always men !!!) who are :

3] Believe in the dark forces & works of very sinister personalities (eg., the constant mention of the book  Necronomicon by the Arab, Abdul Alhazred, who was a genius par excellence)

No doubt that at times his stories have a certain amount of Racism present in it, never the less, Lovecraft still pens his stories with a masterstroke of a true wizard of the terrible. Most of his main characters as I have stated before are common scholars or scientists except for ‘Imprisoned With the Pharaohs’ where the poor person imprisoned is the world-famous escape artist (got to love him) Harry Houdini.

My personal favourites in this book were ;

1) The Transition of Juan Romero

5) Imprisoned With the Pharaohs (I love Houdini)

Lovecraft refers a lot to Edgar Allen Poe in most of his early works especially in ‘The Shunned House’ where it looks like he really was enamoured by the original creator of the macabre.

All in all…….a thumbs up for Lovecraft & his ‘madness’. Now I am going to check out all the movies that have been based on this stories. Indeed, many movies have found their genesis in the works of this master of ghastly descriptions.

I shall post some more information & links after I finish my research. Got to get my students to check this guy out.