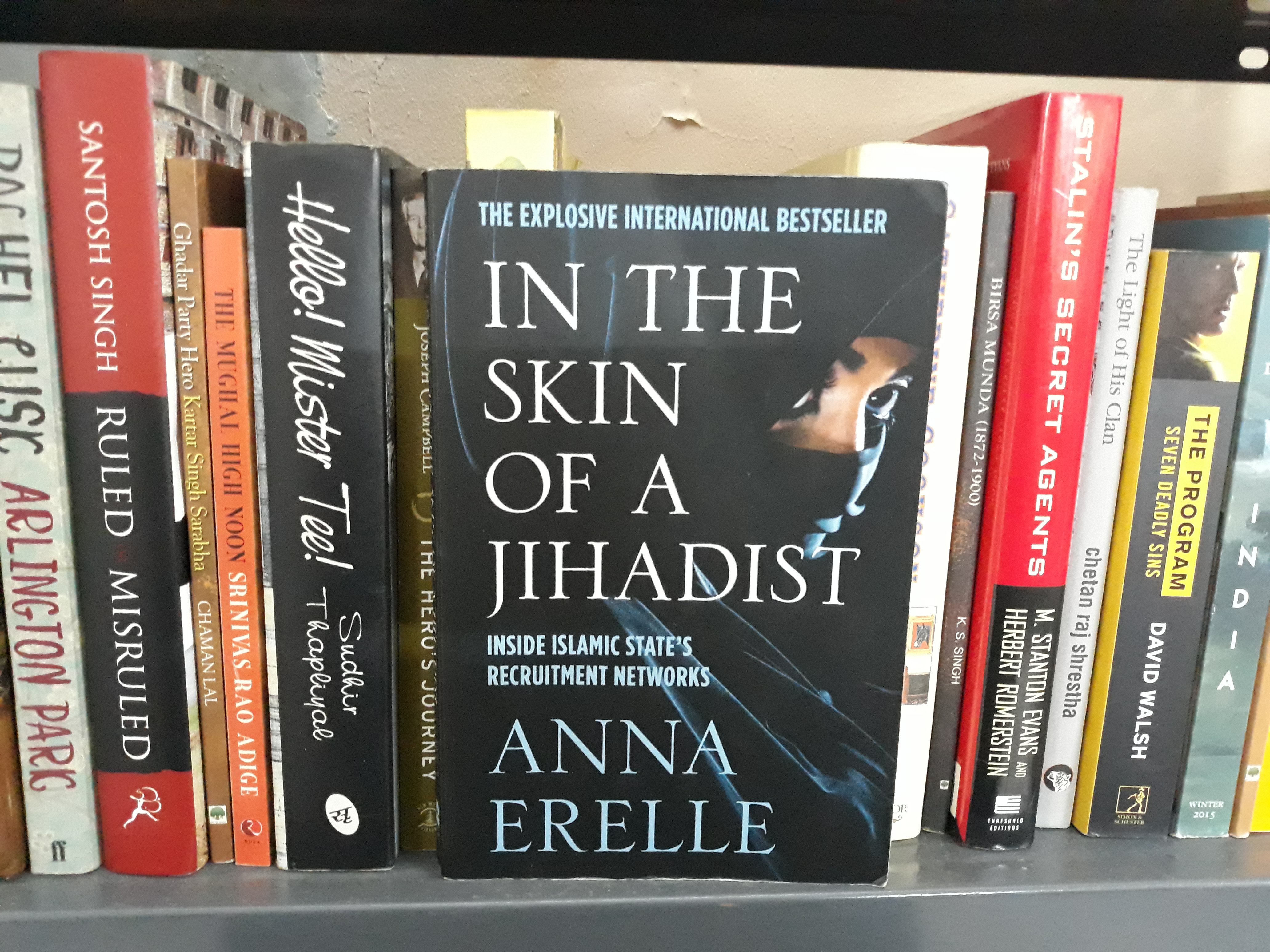 This was not the first time I was reading In the Skin of a Jihadist by Anna Erelle. I had read the book way back when it was first published in the year 2015. I had got my copy from my favorite Mumbai bookstore, Kitab Khana, and I remember finishing the book in two days’ time and being totally shocked by it.

I picked it up to read, yet again this year, because of the research I’m doing on Jihad and Islamic terrorist groups for my next book which I plan to write next year. So, I took the whole of last week to read the book, and yet again, it was a shock worthy experience. But because of my research on the ISIS recruiting network as well as my reading material on the Middle East, especially on terrorism, I managed to scale down the shock.

But yes, this is an eye opening but dated book. By now all the events mentioned in this seminal book in 2015, the year it was published, has all come to pass or has been changed. So, why do I still recommend the book? Because what is being mentioned here is still taking place. The ISIS recruitment network has not fazed out or stopped. It has become more complex but for a reader who just wants to get the basic idea of how it is done, this is a book worth the read.

The book is about how a French journalist, Anna Erelle, for a story she is writing, gets in touch with an actual ISIS soldier/fighter/jihadist living on the borders of Syria and Iraq during the year of 2015. She disguises herself as a young Muslim girl convert to lure in the jihadist to give out secrets of the ISIS recruitment network. Anna has no idea of how dangerous this game is and how it is not so easy psychologically, spiritually, emotionally and physically to be doing what she is doing. ISIS jihadists are and will always be dangerous, but she perseveres to get more information, dressed in a Hijab under the alias of Melodie, and lands up in a situation that we would never ever want to be even in our wildest dreams.

The book is penned meticulously, with the eye of a true journalist. It is exceptional in its content and can be a good book to deter people from joining such terrorist organizations and inform them about the gross side of these ‘so called’ Sunni Muslim Islamic jihadist and terrorist groups.

As a researcher, it was a good introduction and a quick read to get deeper into other more detailed books about the ISIS recruitment networks. I’ve been researching this topic for the past three months and it’s been tough on me psychologically and emotionally. This is not a subject for the easily squeamish or those who are not used to this kind of data. This book is not as detailed in information and content, but that is because I’m looking for a much more detailed book about this recruitment system, with all the statistics, graphs, images, et al, to aid my research.

The book is meant for mature audiences and not for the easily impressionable and the vulnerable. This book is dead serious in its tale and is not a joke. Lakhs of people have been recruited using social networking sites, especially Facebook and Skype to lure innocent and vulnerable and easily deceived minds into the ISIS jihadist group. And the shocking part is that most of the people who do join are women, half of them being young girls barely out of school.

So, if you are easily scared by such content then don’t read this book.

However, if you want to read the book with discernment and for its value in contemporary politics and current affairs then this is the book you should be reading. This book is not ‘an entertainment’; it’s serious and not to be joked about. I know I’m repeating this a lot, but I must make myself clear about that because it matters.

This is a thought-provoking book to read for those with discernment, and to such people do I highly recommend the book.

Looking for an easy to read book on the ISIS terrorist group then pick up your copy of this book today. Looking for a serious read about terrorism then this is something you should read, if you are not easily put off. Looking for a book on ISIS for research, then this is a good introduction to their dark world.

I plead with you not to read this book as an entertainment. Cities have been razed to the ground because of this menace and I would beseech you to read it with the seriousness which you might not even reserve for the Bible.

Let’s hope that we see an end to global terrorism in our time, during our watch.

It’s high time we start taking an active part in conquering the hearts and minds of people not with AK-47 rifles, but with love.