Hello everyone! This is me insaneowl, aka Fiza Pathan! 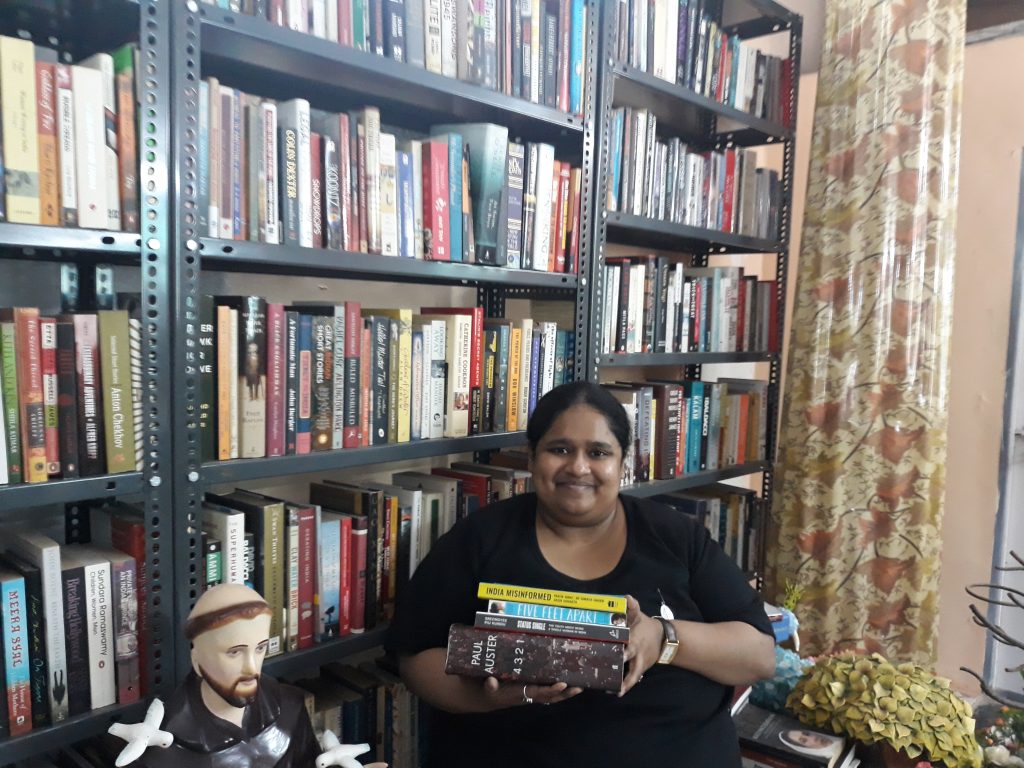 Well, first I read the tome 4321 penned by Paul Auster, which took me two months to read. It took a while because Auster writes, as I’ve realized, in the narrative style, in dense prose and very detailed. So yes, it took a while, but it was worth the read. I’m so happy I read 4321 by Paul Auster, which was on my TBR shelf for the longest time possible, and I hope to read more books by him soon.

Speaking of which, I’ve got so hooked onto Paul Auster’s narrative style that I bought a whole collection of his fiction and non-fiction works from Wayword & Wise, a curated bookstore which I love to patronize for international titles. I am planning on reading Paul Auster’s The New York Trilogy next. I’ve started Oracle Night and might finish it before I start The New York Trilogy. Yes, I read many books at the same time! Right now, I’m reading 21 books; that’s why my name is ‘insaneowl’!

So, I read this epic book 4321 and just loved the ending. I can’t believe why it didn’t win the 2017 Man Booker Prize. But then again, I’ve not read George Saunders’s Lincoln in the Bardo yet, so I will have to keep that thought or opinion on hold until I do so.

This year 2019 was the first time I was reading the works of Paul Auster—what was I doing with my life! But if you think that is weird, then here’s something even more bizarre. I read The Handmaid’s Tale for the first time in 2019.

I read the graphic novel first which came out this year. They did a brilliant job with it and those of you who are Atwood fans should read the graphic novel of The Handmaid’s Tale. I read the graphic novel and was not satisfied, and so immediately sat up in my office after I finished my daily typing work and read a paperback version of the original Atwood novel. I can’t believe I have ignored this wonderful work of literature and this author for so many years! I am now in the process of reading more of Atwood’s books but not before I read some more of Paul Auster.

If I had to choose right now between a Paul Auster novel or a Margaret Atwood novel, I would defiantly go for Auster. I’m in love with the way he tells a story which grips you till you are numbed by his elegant writing style. I’ve borrowed some Atwood’s from the MCubed Library in Bandra West, and hope to get to them soon.

I’ve been drunk on Bru Gold coffee for the past few days. Been way too busy teaching my classes and correcting papers and barely manage to get a good night’s rest and to read at the same time. But I managed to read all the same and I read a YA novel after a long time.

I’m not sure whether the book came first or the movie, but I read this cute story called Five Feet Apart by Rachael Lippincott. It was something on the lines of The Fault in Our Stars by John Green, and it made me cry like a baby. That’s why I don’t like to read a lot of YA books, because they make me cry. That’s because I have this totally one-sided high school crush of seventeen years behind me that my eyes get misted when I read a love story of two young people. Call me a softie but, yes, Five Feet Apart was a good book and I highly recommend it, especially because it creates awareness about this disease called CF or Cystic Fibrosis. So, please pick it up and read it because it is a really well written YA book.

Another book which was on my TBR list for a whole three years was India’s Bandit Queen by Mala Sen which I finally read in one go and finished last week. I don’t know about anyone else, but I’m a huge fan of the legend that was Phoolan Devi, India’s official badass bandit queen. I read anything and everything written about her or by her. Mala Sen’s book was at the Victoria’s Library run by Mr. Iqbal and his wife Muneera ma’am. I picked it up to read it at long last and was really blown away by it.

I realized when I read Mala Sen’s book that there was a lot of other backstage drama going on behind the personage of India’s Bandit Queen. I also realized that Phoolan Devi was not the first bandit queen in India but the second, the first being a Muslim dancing girl who had turned a bandit. Most of the Indian fiction short stories I pen are always taking place in this region of Chambal where Phoolan Devi lived in the 1970s and 1980s, first as a fiery teenager, and then as a wrathful young adult bandit with an army of male bandits under her charge. Phoolan Devi to me takes feminism to a totally new level which always seems to somehow vibe well with me; not that I’m the violent and ‘taking to the arms’ sort, I hate the sight of a gun to be very frank. But the book was excellent and informative. I returned the book on time so for once therefore, I did not have to pay a fine. Then I went on rummaging through the shelves and picked some other wonderful books to read. I am hoping to read another Phoolan Devi book soon.

But yes, I’ve been reading, writing, researching and teaching and not blogging enough. I hope this post gives you a glimpse of the bookish world of insaneowl — the voracious appetite for books is insane and I am of course quite insane and sometimes inane!

Till then, happy reading to everyone!