I am not a people person. I know that seems paradoxical taking into account the number of social networking sites I am on, and the number of writers I interact with on an everyday basis, but yes: I’m not at all a people person.
I seldom listen to music and have stopped watching the television since 2010. My time is spent only in teaching at my tutorial which I am building into an academy, and of course a lot of reading, and a lot of writing. Many of my ‘so called’ well-wishers say that I’m living a very unhealthy life for a woman of 26 years. One even went on to say that I remind her of a medieval monk in a Trappist order. I took that as a compliment. I like Trappist monks but undoubtedly Benedictine monks will always be my favorite clergy…they after all write the best books ever on Christian thought. However, the fact remains: I am not a people person. I never look into the eyes of the person I am conversing with. It has been a trait carried on since childhood, and I am proud of it…it defines me…it defines Fiza Pathan, the teacher and writer; it is an important ingredient in the magic potion that makes me who I am.
One of my friends once said that ‘to know Fiza, you’ve got to know the books on her shelf’…it was a line spoken in earnest I am sure, but what nobody other than my family knows is that, now my books fill up the whole house, let alone the bookshelves, and that even if it took a person a decade, they wouldn’t be able to comprehend the substance of my personality at all from the books that I read…for I read almost anything.
My students are the ones who coaxed me to write at least about some of the books on at least one bookshelf in my home. At first their statement seemed to me like a suggestion, until lately it has turned into an order. So therefore I move towards one tiny bookshelf for the sake of my students, who wish to know what kind of person I am…but I’m sure that even after this exercise, they will and shall never hold the key to the forbidden realm of my sometimes colorful and sometimes dark personality.
I’ll be analyzing a bookshelf which lies in my room where my bedroom television was supposed to be (I gave it away in 2014 for more room for books). 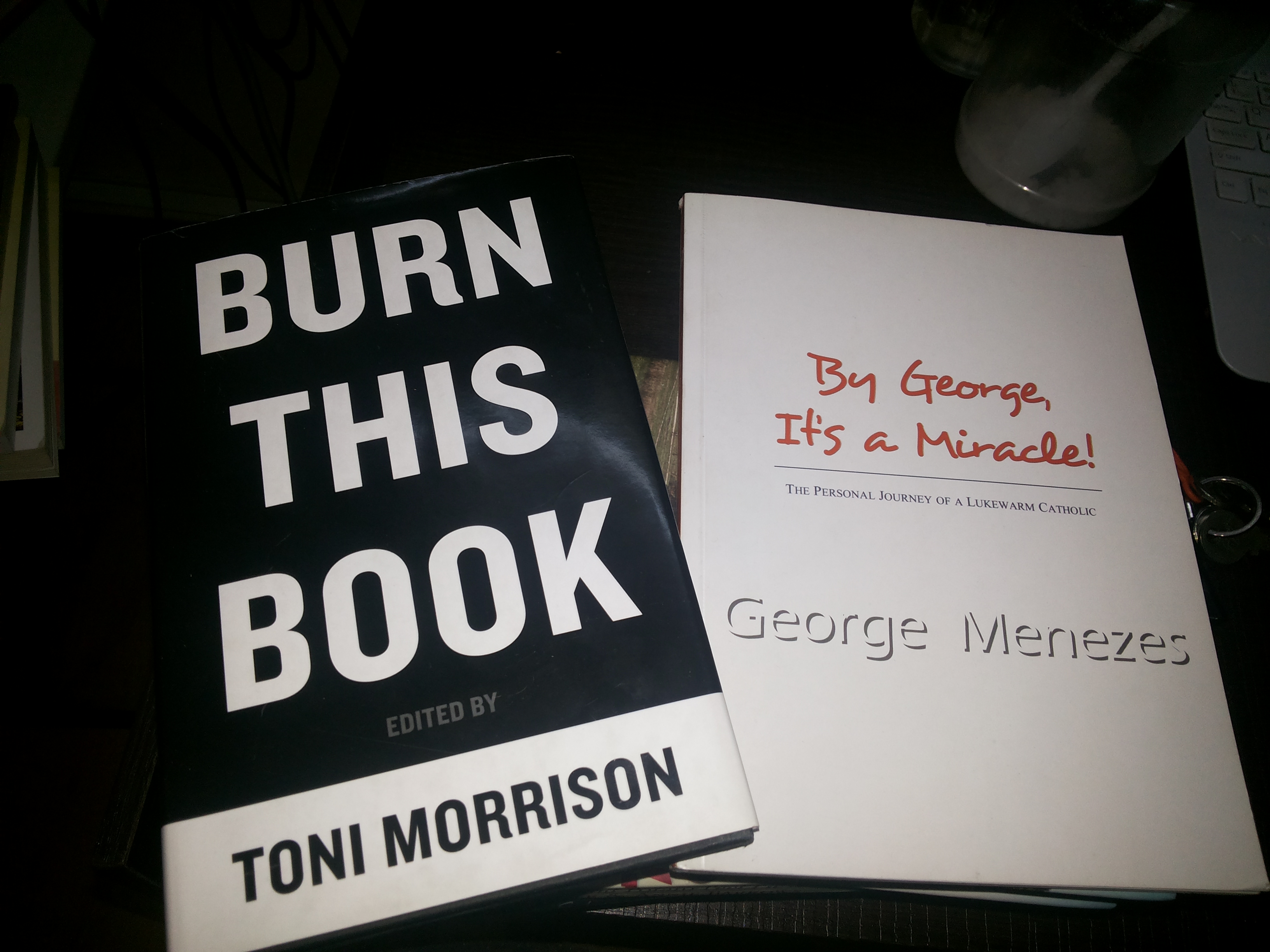 The first book I see there sitting comfortably with its mates is By George It’s A Miracle by George Menezes a famous Catholic writer who describes his journey as a lukewarm Catholic. Am I a lukewarm Catholic? Well I do pray a lot, go to church every Sunday, receive the sacraments often, in my youth I was totally involved with the activities of the church and even now I am through my writings. So does this book describe me? Let’s look at another.
Ah! Burn This Book which has been edited by Toni Morrison of the ‘Song Of Solomon’ fame which is a collection of a few essays of PEN writers speaking out on the ‘power of the word’. I really loved this tiny book. It contains the writings of Pico Iyer, Orhan Pamuk, Salman Rushdie, John Updike, Nadine Gordimer, Russell Banks and many more PEN activists. I’ll pick out my favorite quote from the book made by John Updike. Goes something like this:
“We must write where we stand; wherever we do stand, there is life; and an imitation of life we know, however narrow, is our only ground.”
Deep words made by one of the most extraordinary men of our lifetime. So, has anybody learnt me yet? Let’s pick up a random one now.
Still Alice by Lisa Genova is the book which I pick up. I remember reading the synopsis of this novel at Kitab Khana, a bookstore in Mumbai, and I just knew we were made for each other. As most of us who are avid readers know, this story is about a woman who suffers from an early onset of Alzheimer’s disease. My maternal grandmother died because of Alzheimer’s, and since then I’ve been fearful about this dreaded disease popping up its nasty head maybe again…it’s just terrible to even think about it. However, Still Alice was a very moving read and I’m waiting impatiently to read Lisa Genova’s next book Inside the O’Briens. However, let’s leave this tender book on the shelf and grab hold of another one in front of it.
The book is fat and bulky with the pages yellowed over time, but the book is one that brings back memories of school. Marker by Robin Cook, it is the first edition. Reminds me of all the medical thrillers I used to read in high school. I could read a whole Robin Cook in a day’s time, but there was someone much more well- read and a greater reader than me…my first crush…and you could say my only crush. He loved reading Arthur Hailey and Dan Brown Books. I never told him that I liked him; we can’t really do these things that freely yet in India without getting into a mess. I can’t remember at all what ‘Marker’ was about, but I remember my love, which still I hold close to my heart…those days…it’s been 11 years since I left school….
Next to Marker lies a whole series of medical mystery thrillers which I know I have read, but can’t remember the details that accurately.

And then suddenly, my hands are clasped around Devdas by Sarat Chandra Chattopadhyay, one of the greatest Indian novelists. It’s a tiny book really, but it has been the most important story ever told in India. The character of Devdas, and his story has become a cult here in India. Many Bollywood directors have tried their hand at recreating the magic of the story of Devdas, which is a tragic tale that has become synonymous with a passionate, intense love that does not find consummation. But as always, no movie however great can really bring out the depth of the written word of Sarat Chandra Chattopadhyay, and his heart broken Devdas.

And what else do we have here? David Copperfield by Charles Dickens which sits silently to the right of Tao of Pooh and Te of Piglet by Benjamin Hoff; a hardcover of Franz Kafka’s complete stories besides Stephen King’s Gerald’s Game; the complete works of Oscar Wilde next to the Diary of Saint Maria Faustina Kowalska: Divine Mercy in My Soul…gracious my sense of book placement is odder than I thought.
However the fact remains, I’ve read them all and they all know me…but you will never know who I really am.
I am the breeze that blows over the dark horizon of the setting sun, stirring dead leaves, so dry, into action for the last time…If my books can’t tell you about my true self then what of it; read on and take in as much as you can glean.
Copyright © 2016 Fiza Pathan