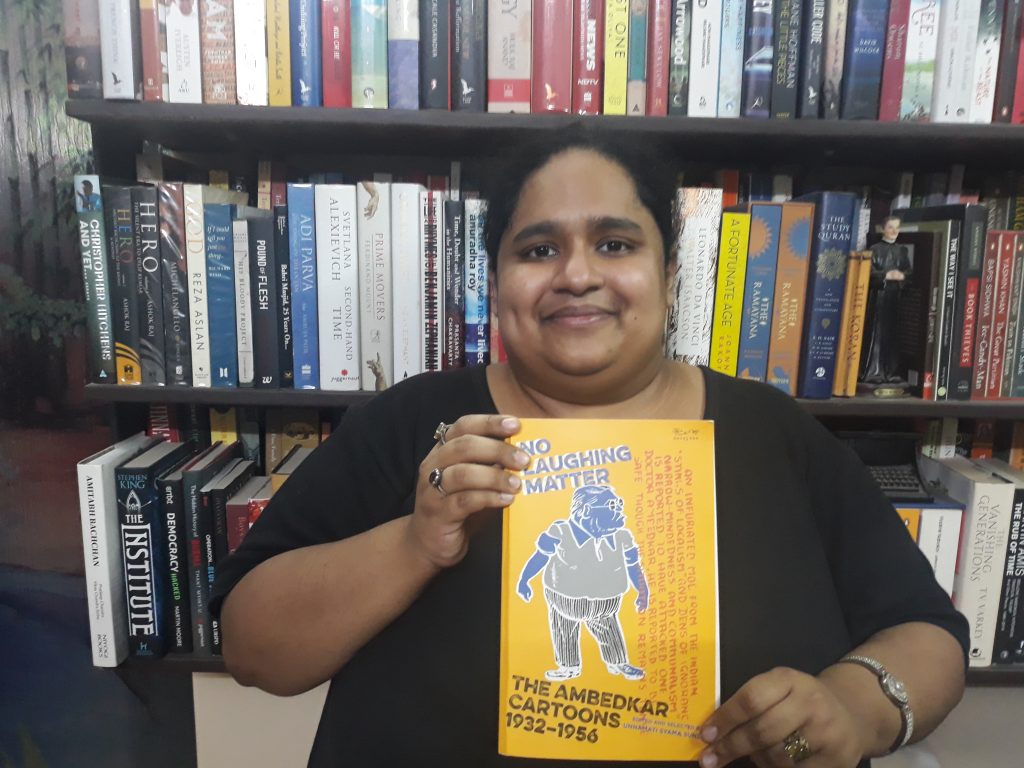 Navayana Publishing has been bringing out some of the best books that I’ve been reading for the past five years. Five years ago, I discovered Navayana books in a curated library-cum-bookstore in Mumbai called ‘Trilogy: The Eternal Library’. Since then, I’ve been buying most of the Navayana books in bulk. Navayana is a brave and erudite publishing house ready to be there for the truth on every matter possible.

No Laughing Matter: The Ambedkar Cartoons 1932-1956 was bought by me in the year 2019 from the best bookstore in Mumbai, Kitab Khana. I picked it up by just glancing at the publishing house’s name and logo on the cover; I buy all the Navayana books I can get my hands on. It was only now in 2020 that I got the chance to read and ponder over this very disturbing book. Yes, this book is disturbing to a person like me who holds Dr. B. R. Ambedkar or, as I like to call him, Babasaheb, in the highest esteem. Not only was Babasaheb the only sane voice during the Indian Freedom Struggle but he is one of my favorite writers of all time. He has been in my life right from the time I discovered his writings at St. Andrews College, Bandra West, in the year 2005 when I was studying for my bachelor’s degree. His writings have opened my eyes to the reality of Indian society, especially concerning caste and caste politics. Due to his magnificent personage, I found my love for studying, reading, and writing. He is my favorite non-fiction writer, period; and maybe, forever!

To see Babasaheb painted in such a disgraceful manner by so-called political cartoonists of his day and age shocked me and at times disgusted me. The cartoons cataloged in this book are disturbing, misogynist, sexist, racial, brazen, and just plain disgusting. It is fair enough to say that the language and idiomatic language in India at that time was completely saturated with caste prejudices. The sad part is, that times have not changed. This book was edited and created in the first place because a demeaning cartoon of Babasaheb was prominently published in the Grade 12 political science textbook. This was in the year 2012, and the cartoon was non-essential and a casteist slur to say the least. What reason prompted the publishers of that political science textbook to include such a vile cartoon in a textbook is beyond my understanding. It hurt my sentiments; I can imagine how my Dalit brothers and sisters must have felt when they saw Babasaheb being depicted in such a manner! The cartoon was uncalled for which prompted political cartoonist and writer Unnamati Syama Sundar to do a research on most of the English language political cartoons of and about Babasaheb between the years 1932-1956. He found so many offensive cartoons done to demean Babasaheb that he decided with Navayana to show to the world how even political cartoonists were ruled by their prejudices against caste and those who spoke anything other than the mainstream thought of that time.

This book contains the following information which you as an Ambedkar student, academician, follower, professor, researcher, or writer, will find very useful in your work:

The book is excellent as a resource for further studies on the Ambedkar legacy and I think this book needs to be put into more people’s hands to show them how our estimable political cartoonists of yore used to deride and ridicule a man whose legacy has withstood the test of time even in these trying times.

This book is not a joke. This book has to be taken seriously and should be read with discernment. Pick up your copy of this book today and educate yourself, especially if you are an ardent Babasaheb Ambedkar follower like me.

I agree with Sundar that the political cartoons in India have not been studied closely. I’m glad he has taken the initiative to present this book to us and to enlighten us. I feel one with Sundar because even I was introduced to Babasaheb, first through the biography of Dhananjay Kheer, and then the 2000 biopic which I saw on YouTube in the year 2013. I loved both the book and the movie. I have Babasaheb’s photograph framed in my office-cum-writing hut and he is the reason why I write my non-fiction books and non-fiction pieces.

So, what are you waiting for? Go and buy this book and then go on to buy more of Navayana books to add to your intellect and spirit. I liked the meticulous way this book was presented. It’s a brave book with a brave topic and I salute the publishers and the writer for going ahead with this project. The fact is that if you find any of these cartoons in the book No Laughing Matter laugh-worthy, then there is something terribly wrong with you; most if not all of these cartoons are just simply ‘sick’ and I’m ashamed at the callousness of these political cartoonists who were and are ready to doodle anything just to get the day’s work done.

I hope to read more Navayana books soon; they are a wonderful publishing company bringing out thought-provoking stuff. After reading these books, I hope to share them with you here on my blog either through a book review or book analysis.