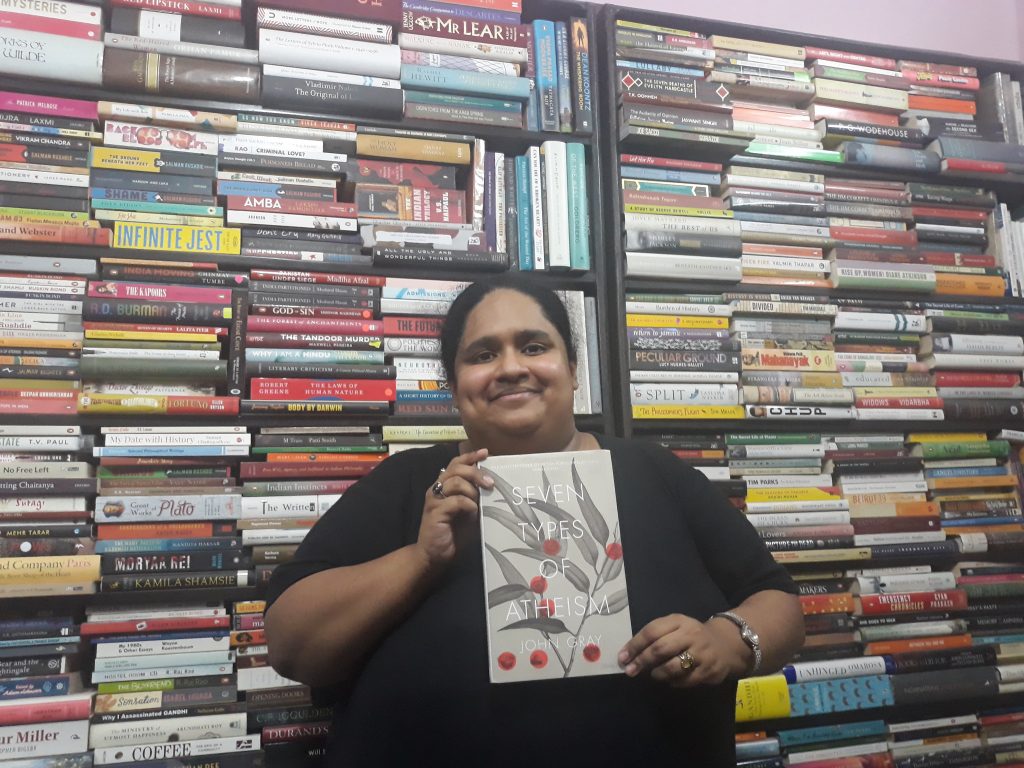 Seven Types of Atheism is a book to decode what it really means to be an atheist and the different types of Atheism. In this book, you will encounter seven types of atheism which mostly emerge from monotheism and the Christian religion. John Gray has done a great job of slicing things down so that lay analyzers like me can comprehend the variety of atheist cults and thoughts that exist in society in the past, present, and maybe the future. I loved the book; it is the best non-fiction book I’ve read so far in the year 2020. It’s a seminal work on atheism and the different philosophies of atheism. I picked this little book up from one of my favorite bookstores ‘Wayword and Wise’ in Mumbai, our town area. I picked it up in the year 2019 and I can’t believe it took me a whole year to decide to read this outstanding book on philosophy. I have scribbled my thoughts and favorite lines throughout the book that it looks like a college bench covered with graffiti. I just loved every moment of this well-edited and well-researched book.

Seven Types of Atheism by public intellectual John Gray is about the seven types or strands of atheism. The first is something from which Richard Dawkins fans fall into. It is not real atheism but just an elaborate dependence on science and technology. Such atheists just substitute religion for science which is not what real concrete atheism is all about. The first type of atheism dwells a lot on the historical figure of the Lord Jesus Christ trying to substitute him with science and technology. This is nothing more than trading clay for dough. At the end of the day, you are still going to be kneading it and that is exactly what atheism is technically not about.

The second type of atheism is nothing but a hollowed-out belief of the Christian faith in secular terms. It talks about the cyclical nature of our entire existence saying that things happen in their own time so why make a fuss about it and be anxious about it. There is a strain of liberalism to this atheism which Gray narrates very eruditely which emerges directly from the major monotheistic religions of our time, especially Christianity.

The third type of atheism is dependent on science but creates new theories that seem to want a particular end result, like the Hegelian theory of Dialectical Materialism. At the end of this atheism, humans, and thinkers are still looking to gain a sort of utopia or ‘heaven on earth’ as promised in our religions. These types even believe in the technological ascension, scientists have been working on. It’s called ‘Cyber Ascension’. That is why people are leaving their bodies in ‘suspended animation’ so that in the future they can ‘ascend’ or be revived again. The way all this is described by Gray is at times hilarious and at other times makes us wonder what skewed minds such thinkers had and have.

The fourth type of atheism is the modern political religions, where a political party takes over from religion. Naturally, Fascism, Nazism, Socialism, the ISIS cult, is discussed here. Such atheism espouses a utopia that will be a secular society, except that we know for a fact that throughout humanity’s history we have never had a ‘secular time’ per se. Such atheism believes in a past ‘secular time’ and wants to return to that so-called ‘past glory’, but when we know for a fact that there was no such secular past then why do we believe all these claims politicians in the past and present have been dishing out to us? I was enraged when I read about this type of atheism. I was enraged because I can see that this is the atheism that is doing the rounds since the beginning of consciousness and every time people get duped into believing it. It’s a shame that we don’t learn from history.

The fifth type of atheism is a category that I like very much personally because I fall into this category. Well, at least I fall into this category to a certain extent of my consciousness. These are the ‘God-haters’. Such atheists are mostly nihilists that means they just don’t believe in anything and go with the flow. They can’t look at God as a benevolent being because where history, as well as present circumstances, show, God is doing anything but being that benevolent being which prophets down the ages have claimed Him to be. I am a practicing Roman Catholic, but I’m still a nihilist because I don’t know what to believe. Do you?

These men are the real deal. They admit that having a religion is natural for humans but such individuals have lost their venom and urgency for it. It’s something similar to the strictest forms of Zen Buddhism where disillusionment with and of the world is the true atheist ‘Nirvana’. They realize the lack of meaning in history and the very fact that they are at least going through history to make that point is a sort of redemption in itself. This atheism tells us a fact of life, that salvation is not an event in time, it is a release from time. Reading these two atheisms made me shed a tear or two because at last an ardent and hard-working intellectual like John Gray was telling me what I wanted to hear all my life in my reading.

If you as a reader have the above and more seemingly rhetorical questions going around in your head, then read this book. You won’t get an answer to your questions but you will get a weighty assurance that they are rhetoric and that is a redemption factor enough for a day.

“Therefore, do not worry about tomorrow, for tomorrow will worry about itself. Each day has enough trouble of its own.” —Matthew 6:34

This book has taught me to live one day at a time, and the fact that I am human, and so is everyone else. If we are going to survive this thing called life together, then we at least should stop looking at another person as anything else other than a human being. If we can’t do even that, then at least acknowledge you can’t and that too will a step closer to a utopia that most of the people of this world dream about every time they put their heads down to sleep. You be the utopia in action, then maybe seeing you, someone else will realize their missing priorities and make a move towards real self-actualization which is disillusionment with time and release from time.

I will be doing a deeper analysis of this book soon. Please do pick up this little book and read it to become a better intellectual than you were earlier. If you are still stuck on Dawkins then you need to read this book to realize another point of view sans science. It is a heavy read for a train or bus journey, especially if it is a bus or train journey in Mumbai, India! It is a good book to study at night with a yellow pencil in hand or at your study desk or in front of a warm heater on your favorite couch. Don’t read and leave but read and perceive. Do pick up your copy of John Gray’s amazing book today!