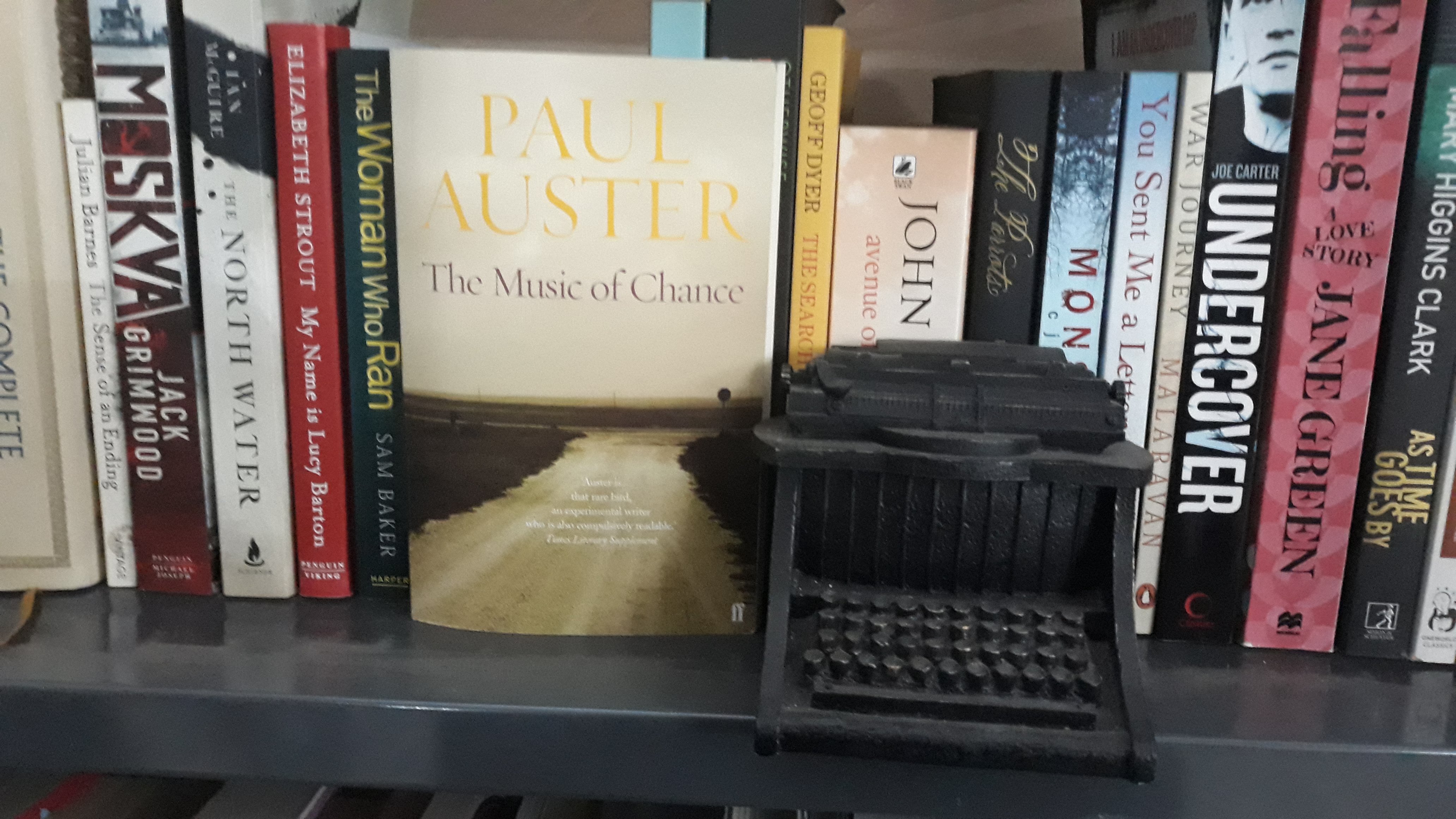 I picked this book up at the Wayword and Wise bookstore during the last week of April. I have recently become a die-hard Paul Auster fan and wanted to read more of his books. I finished reading ‘The Music of Chance’ last night; it is a phenomenal book, with so many allusions to philosophy that at some places the book made me cry.

The book has a parable like edge to it, with a bit of existentialism and Greek references, not to mention Paul Auster’s top favorite things which you will always find in his books:

The book reads like a fairy tale but with a cutting edge to it that makes one sit back and think over the words, the narration, et al. Paul Auster uses the power of the third-person narrative to tell his stories, which sound like he’s going to spook you, but it’s just his way of framing a sentence – EVERY SENTENCE— to make you stand up and take notice. This third-person narrative is also present in this tiny book of his – ‘The Music of Chance’. 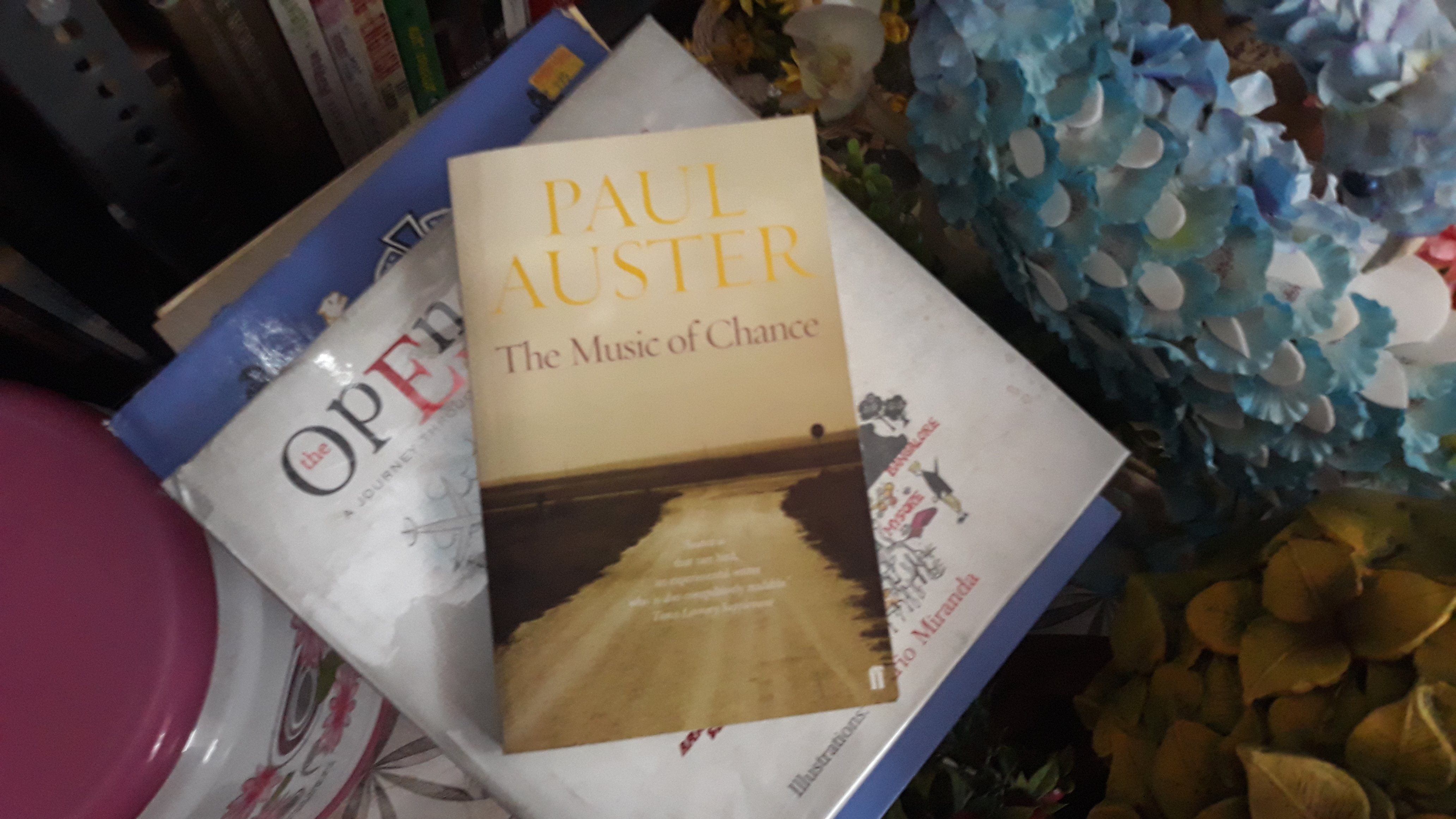 The story is of Jim Nashe who has responsibilities but who leaves it all for the life on the road. He travels in his red car with a few essentials which later on we realize are some of his music sheets which he used while playing the piano. One day, he picks up a bruised young man called Jack Pozzi who claims he is a poker genius. Jim is out of cash and he needs some money badly. So, he takes Jack for his word and gets into a poker game with the most bizarre set of millionaires, Flower and Stone.

Jack compares Flower and Stone to the immortal comedy duo of Oliver Hardy and Sam Laurel. I’ve seen that Paul Auster in many of his books refers to this duo at some point or the other in his narratives, thus I infer the author is infatuated with them.

Flower is similar to Hardy while Stone to Laurel. They have, unlike the original comedy duo as portrayed in their comedies, won a great sum of money on a lottery ticket and now are millionaires. Resourceful Flower who is an accountant has doubled their money through judicious investment of their winnings in stocks and bonds, and so they are now multi-millionaires. Stone is quiet, lets Flower do most of the talking, just like the Laurel of the comedy duo, interrupting only to speak frankly without ‘flowery language’ and to fill in the gaps ‘with a stone like voice.’

With these people Jack decides to play poker, expecting to win. But he doesn’t, and Jack has no more money to play or pay. They therefore sign an agreement to build a certain wall with the stones of an Irish castle brought down by the millionaires. Jim and Jack would have to build the wall alone to pay back their dues for losing at poker.

Let me focus your attention on the wall and the stones required to build the wall.

According to me, the stones are the jobs we do every day while at work: doing the same thing over and over again. We do it thinking that we will be remembered in some way for our efforts. But we are wrong, for the wall is more important than the people putting it together. The wall or our means of eking out a livelihood will be the only thing remembered; that’s it. We get actually next to nothing for our work, both blue- or white-collar workers. There are references in the book, as Jack and Jim carry the stones to build the wall, which show us that it’s all about the job and not about the individual:

And so many other hidden messages about how at last money has started to rule us, and the sociology of understanding work is deeper than we think.

But the story began with poker.

Jack Pozzi was an ace poker player and was sure that he would win against the millionaires. This had nothing to do about ‘chance.’ Jack was absolutely certain that Flower and Stone were going to lose. But alas! Jack lost ‘by chance’ and ended up having to build the wall along with Jim.

The book has a simple plot, but written with penmanship near perfection. I’ve seen that Paul Auster has a power over you as he writes in the third-person narrative style. He wants to pack a punch with a thrill in every sentence, and he does too. Every line and every word are digested by the reader. ‘The Music of Chance’ is a work of a master; you’ve just got to read this book by Paul Auster. 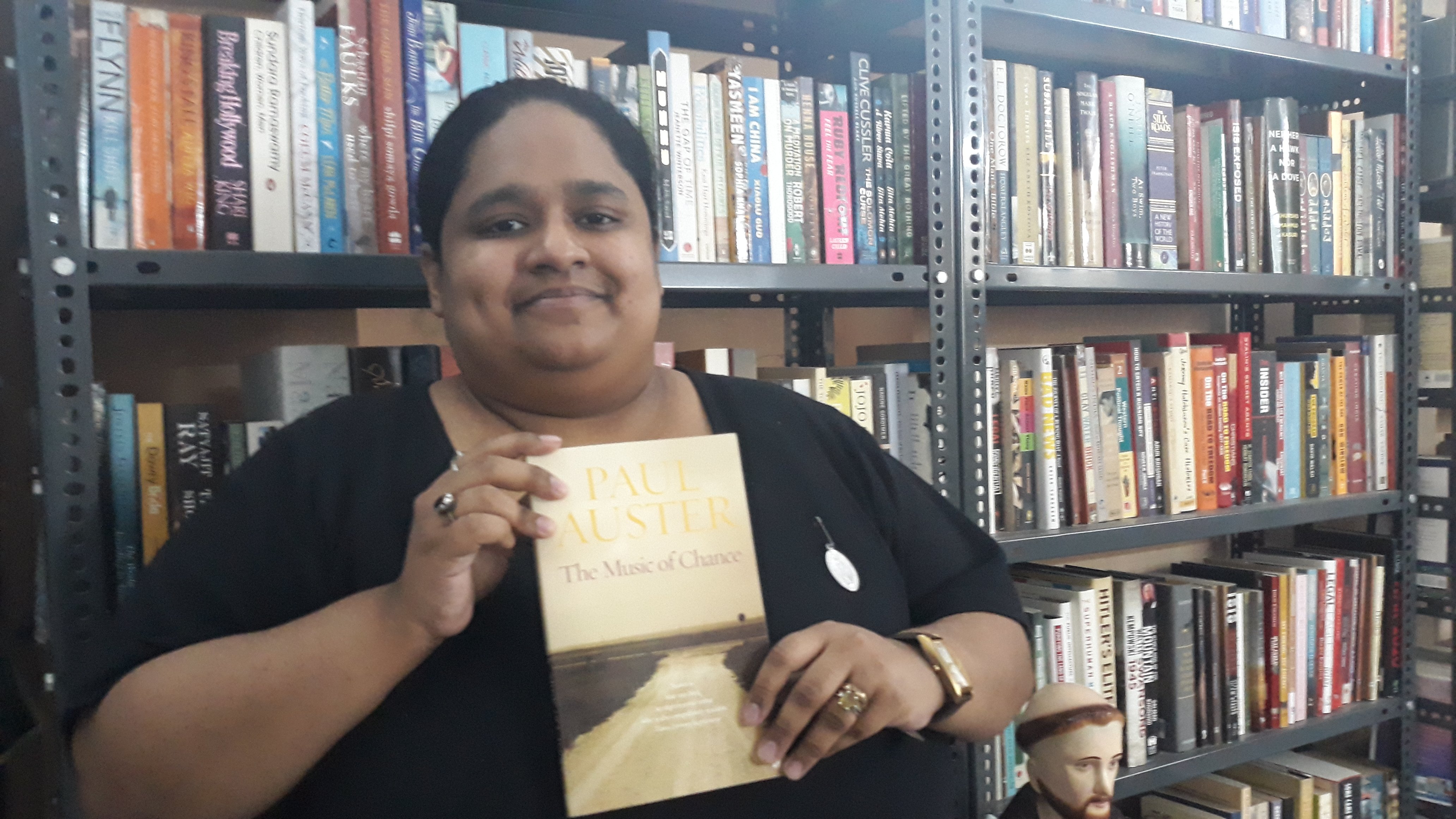 I highly recommend this book to all literary fiction lovers. It’s the perfect book for the summer and so please do read it in the Summer of 2019. If you like books with hidden parables in it then you should read this book. If you like books with few characters but with a strong gripping plot with a lot of intellectual matter to chew on then this is the book for you. If you want to read a smart literary fiction book which is easy to read and interesting enough to make you sit at the edge of your seat then you should read ‘The Music of Chance’ by Paul Auster.

I cried when Paul Auster describes the rigors of our regular working lives. We do so much, and at the end of the day we earn less than little. We spend most of our one life just at our jobs; when will we start living? When will we start ‘living’ the reason why we are working for in the first place?! These and many other questions will pop up in you head when you read this literary masterpiece ‘The Music of Chance.’

I look forward to reading more of Paul Auster’s books this summer and you should too!