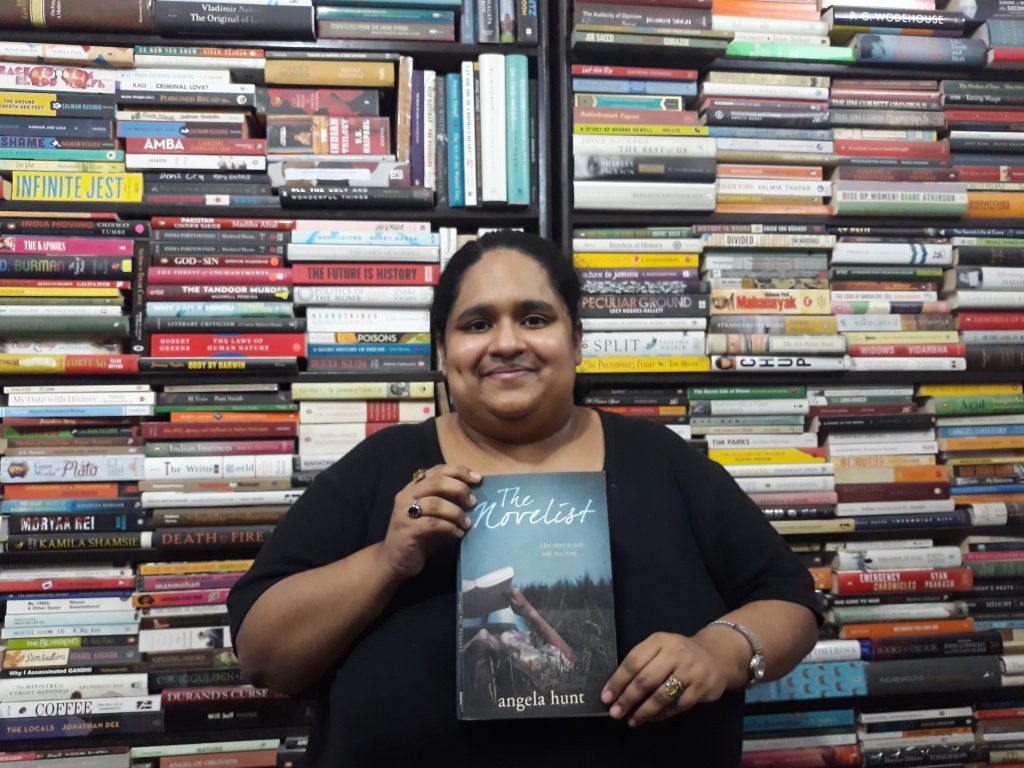 The Novelist by Angela Hunt is a book about how a bestselling action writer manages to come to terms with her wayward twenty-one-year-old son. The book is a very cozy read, excellent for weekend reading. The book is literary fiction, with a parallel fantasy theme running along with the main plot. The book keeps shifting from the bestselling novelist’s life and her offbeat novella that she has decided to write as part of a challenge. The novelist’s name is Jordan Casey who is a middle-aged woman. Her son’s name is Zach who is an alcoholic, a bipolar patient, and addicted to prescription drugs. The parallel story that runs along with Jordan Casey’s life is a story of a place called ‘Paradise’ which is a place created by the imagination of the author Jordan Casey. I picked this book up from Amazon but the first time I came across it was in the Trilogy Library, Mumbai. I am a member of the Trilogy Library and The Novelist was borrowed by me way back in 2015.

However, I did not get time to read the book so I kept on borrowing and returning it until I decided to buy my copy from Amazon. I bought the paperback version from Amazon in the year 2015, whereas the book at the Trilogy Library was a hardcover, a neat copy with a beautiful cover. However, as you can see, it is only in the year 2020 that I, at last, managed to read it. It had been lying on my TBR (To Be Read) bookshelf for five years. I knew this would be a cozy read and so was looking for an opportunity of ‘calm time’ when I would read this book. I have read this book nonstop for four straight days and it was indeed a cute read. I have been sipping coffee after coffee as I have been going through the life of the amazing Jordan Casey who has decided to teach a course in creative writing at a nearby university.

The book would not exactly be an intellectual read at all; it’s pure entertainment and good storytelling from start to finish. Casey is a rich woman who has found success in her Rex Tower action books which have been even made into several movies. She is the mother of two elder daughters who turned out well. Her son, the third and last child, is the ‘so-called’ black sheep of the family. Even at the age of twenty-one, he has still not completed his education; neither is he regular at his place of work. He spends too much time with his friends at bars or clubs. He drinks himself silly, indulges in taking prescription drugs, and is moody, even violent. He is a burden on his two academic and very successful parents Jordan Casey and Carl. Carl is a senior professor in a seminary. Both mother and father try to get Zach on his feet but fail in every attempt. It is only toward the very end of the story that one realizes that Zach is suffering from bipolar disorder and that was the cause of his mood swings.

The parallel story that runs along with the main plot is the fictional fantasy story that Jordan has decided to write as a challenge set forth by one of her students at the university where she has started to teach creative writing. The boy’s name is Ian Morley and it is he who challenges Jordan to write ‘The Ambassador’. Jordan throughout her teaching semester types the story titled ‘The Ambassador’ which is the fantasy story paralleling in a very childish way the story of the Christian faith, especially the coming of Lord Jesus Christ and the ultimate reason why God gifts salvation to sinners. The main protagonist in this fantasy book is a young man called William who is the mirror image of Zach. Jordan wants Zach to read ‘The Ambassador’ after she writes it so that he may take recourse in the Christian faith.

Now, as I mentioned earlier, The Novelist is a cozy read, which in my subjective viewpoint indicates that it is a no-brainer but a well-written book. The fantasy story called ‘The Ambassador’ is a bit too sugar-coated like most chick-lit books are as well as the very sugar-coated story of Jordan, Carl, and Zack. It is a book meant mainly for those who like chick-lit, especially chick-lit books that are based on writing, reading, and books, along with a little bit of drama. As a simple story, it is good but not great if you are looking for something to shock you. If I were told to give a rating for this book, I would give it four stars because I was entertained; I loved the parts concerning the turmoil with Zach and I wanted to know whether I was right in guessing that he had bipolar disorder. I was a psychology student back in degree college and even in my post-degree college, so it was easy for me to guess that the poor boy was suffering probably from bipolar. But I think those of us who have read a lot of books in our life without actually having studied psychology would also very easily realize that Zach was suffering from bipolar disorder. The problem is that the author of this book Angela Hunt has used it as the ultimate ‘revelation’ which comes at the end of the book. I hoped that the outcome would have been deeper than just a bipolar disorder (though it’s very cumbersome to have this disorder) because of the way the book’s synopsis was penned. I had even thought that maybe the book would turn out to be a part thriller, but that didn’t happen.

I’m a big fan of good chick-lit and good literary fiction, and I think The Novelist fits both these genres. ‘The Ambassador’ part of the book is too good to be true. William works at a game machine store which he ultimately ruins. He is Zach in fictional form but a terrible sinner who has given too much into evil. He almost causes the death of the previous owner of the game machine store who can be symbolized as the prophets who were tormented in the Old Testament as well as Saint John the Baptist. This man was Ross and then comes a man called John who is the ‘Christ figure’ in this part of the book. He is killed by being thrown off a cliff but then rises from the dead. John restores order in ‘Paradise’ so that Jordan Casey can come to this place of her imagination and see the beautiful world she has created.

I may be a sadist, but I would have loved a lot of the fights that took place between Zach and his parents to be described in detail to the reader. That’s where the action was in the main story which we completely missed. I guess this was done to make it clear about the seriousness of the author Angela Hunt not wanting even one cuss-word to tarnish her tender book. It is a very clean book: no sex scenes, no vulgarity, and no shocking sights. Therefore, this book can be easily read by preteens as well as teenagers.

I loved the parts which described the college lectures taken by Jordan Casey. I loved the interaction of the students which gives us a lot of good ways to use to write our novels. Of course, I don’t agree with all of them but the parts about character development were really useful and new to me which I enjoyed very much. Here are some of the takeaway points which I was left with after reading The Novelist:

All in all, it was a fun read and a good yarn to clear your mind. If you want a good story with a light plot, pick up your copy of Angela Hunt’s The Novelist today. I hope to read more of Angela Hunt’s books soon. I have to admit that chick-lit and fantasy make good partners in Hunt’s fiction. If asked to choose between the two, I would jump for chick-lit.