‘The Tunnel of Time’ by R. K. Laxman: Book Review 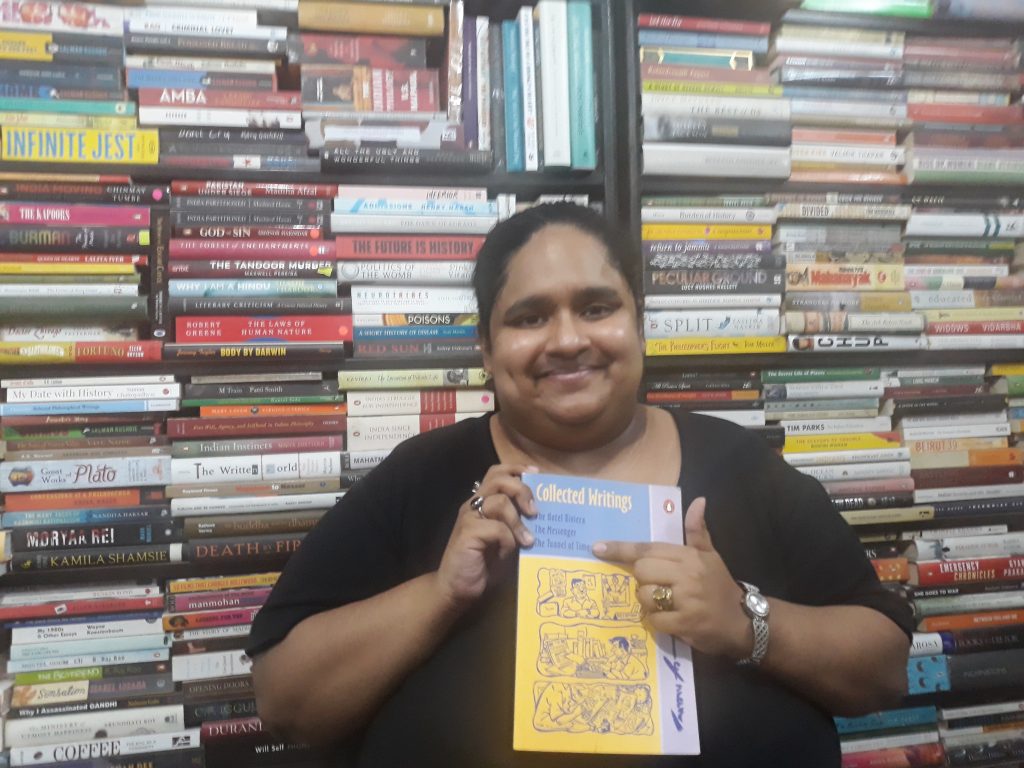 I’ve always been a die-hard fan of R. K. Narayan’s books and it is through him I came to know of his younger brother R. K. Laxman, the famous political cartoonist of India. But I became acquainted with R. K. Laxman’s writings in the year 2010 while teaching English literature to my sixth-grade students. The lesson was an excerpt from R. K. Laxman’s The Tunnel of Time. It was a humorous description of the patriarch of the family, Narayan’s and Laxman’s father, as well as the matriarch, their mother, who gave birth to a large brood of children and was fond of making litho prints of gods and goddesses. I was immediately captured by the different styles of Laxman’s prose and kept a lookout for the book when I visited the many bookstores and libraries of Mumbai. I have chronicled about these bookstores, libraries, and book haunts in my memoir Scenes of a Reclusive Writer and Reader of Mumbai.

I came across the book at last in the year 2012. I found the book at the Landmark bookstore that was located in the Infiniti Mall, Mumbai. It was my second favorite bookstore. Sadly, the outlet was closed down and I cried myself silly over it; I still do.

I bought the book but only managed to read it in the year 2013. This year, I read the book again during the lockdown period because of COVID-19. I loved the book. However, Laxman’s style of writing is very different from Narayan’s style. Laxman comes off as a narrator of events more than a storyteller. This is common among most Indian writers; we tend to narrate incidents and events more than telling a story. But we do it in an unusual way that is our specialty, a specialty that we have gained by being a mix of our Indian heritage and a British colony for two hundred years. Laxman mentions a lot of humorous events in the book, but he only narrates them; if it were Narayan he would, through his art of blunt witticism in prose form, have done a better job.

Still, the book is very relaxing and fun read. It narrates the story of Laxman’s growth from being the youngest member in an extra-large joint family to becoming the maker of the famous Common Man series also called ‘You Said It’ by Laxman. Laxman describes his role in shaping the world of political cartoons in India. He is humorous, highly intellectual, frank, and candid about his take on India of the twentieth century. This is a very good read for all the artists, cartoonists, and would-be artists and cartoonists out there. This is a book where Art is glorified, be it through paintings, sketches, cartoon doodles, or for that matter, even literature. Laxman in the book says that he had always wanted to write but felt overshadowed by his elder brother’s fame, that is, the Grand Old Man of Malgudi, R. K. Narayan. But finally, during his life, he managed to pen down a few novels, short stories, travelogues, and his autobiography that we are discussing today.

Laxman seems to have been a risk-taker where his destiny was concerned. He was not a dreamer, but a cartoonist with a mission. He wanted to become a political cartoonist and he made it happen. He is in that instance very different from his elder brother. Laxman in this book tells us how he moved from newspaper offices to editor’s offices trying to make his ultimate dream to come to fulfillment. He works hard, harder than most cartoonists we see today. He is a man who likes to travel, and the book is a chronicle of all his travels during the twentieth-century and the famous people he met like David Low, Graham Greene, T. S. Eliot, Bertrand Russell, Clement Atlee, Rajiv Gandhi, Indira Gandhi, and so on. It is a vibrant book and very much a page-turner. Laxman is captivating and has an organized system to his writing which, you will also see in his cartoons.

This is a wonderful book for those of us who have grown up seeing the cartoons of the ‘You Said It’ series as well as those of us who associate the masses of India collectively as the famous Common Man drawn by Laxman. His common man is a nondescript individual in his early fifties dressed in a white dhoti or loincloth and a checkered shirt, topped with bifocals, trying to gain an understanding of life in and around India. If you want to know more about the creation of the Common Man and how he came about to become such a familiar cartoon figure in India and the world, you should read this book.

If you are looking out for a humorous book with a little dash of contemporary Indian history then do read The Tunnel of Time; it is priceless. Those of you who are fans of R. K. Narayan and want to know more about him can also refer to this book. Those of you who are fans of Laxman and his cartoons should and must not ignore this book; it’s funny, well-crafted, witty, and full of the simple adventures of a political cartoonist who loved to do things his way; the Laxman way.

I have so many favorite scenes in this book but I think the one that stands out for me is when R. K. Laxman met Graham Greene for the first time and asked Laxman whether Narayan looked like him. That always manages to bring me to tears because Graham Greene was Narayan’s mentor, yet, they had never met each other personally but had only communicated through letters. Ironically it was Laxman who would meet Greene before Narayan. Graham Greene was so excited to meet Laxman because he wanted to be with a person who was the brother of R. K. Narayan, one of his favorite writers of all-time. After Laxman met Greene, Narayan would meet his mentor in another six years for the first time in person. This part of the book always takes my breath away, to see such a highly acclaimed literary figure in Britain love another literary genius from India with so much love and respect. This is true brotherly love and exactly what it means to be a mentor to someone, especially in the field of Art.

I, as an author, was also molded by a mentor Margaret Virany, the famous author of the A Book of Kells: Growing Up in an Ego Void who passed away two years ago. The relationship shared between a budding author and his or her mentor is priceless and I know the loss I feel after Virany ma’am passing away. At least R. K. Narayan got to see his mentor before both passed away from this life; I never got to go to Canada to meet up with my mentor.

I apologize if I have spoken more about R. K. Narayan in this book review than Laxman. I am not ashamed to say that for me, Narayan is a genius who will always surpass anyone where literature is concerned. But Laxman is very good, and a budding cartoonist can learn about abstraction, dimensions, distortion, and get an understanding of what will be expected of them as a political cartoonist.

So make sure you get your copy of The Tunnel of Time by R. K. Laxman as soon as possible on your Kindle. It is a joy to read and dip into over and over again, and I highly recommend it. I shall also shortly be posting a book analysis of this book as well as a comparative analysis of the autobiographies of the two famous brothers, The Tunnel of Time by R. K. Laxman and My Days by R. K. Narayan. It would be wonderful if you could get your copies of these books by that time. The very fact that I am ready to do this in-depth study indicates that the books are of excellent quality; so, grab your copies for enjoyment and reference as soon as possible.