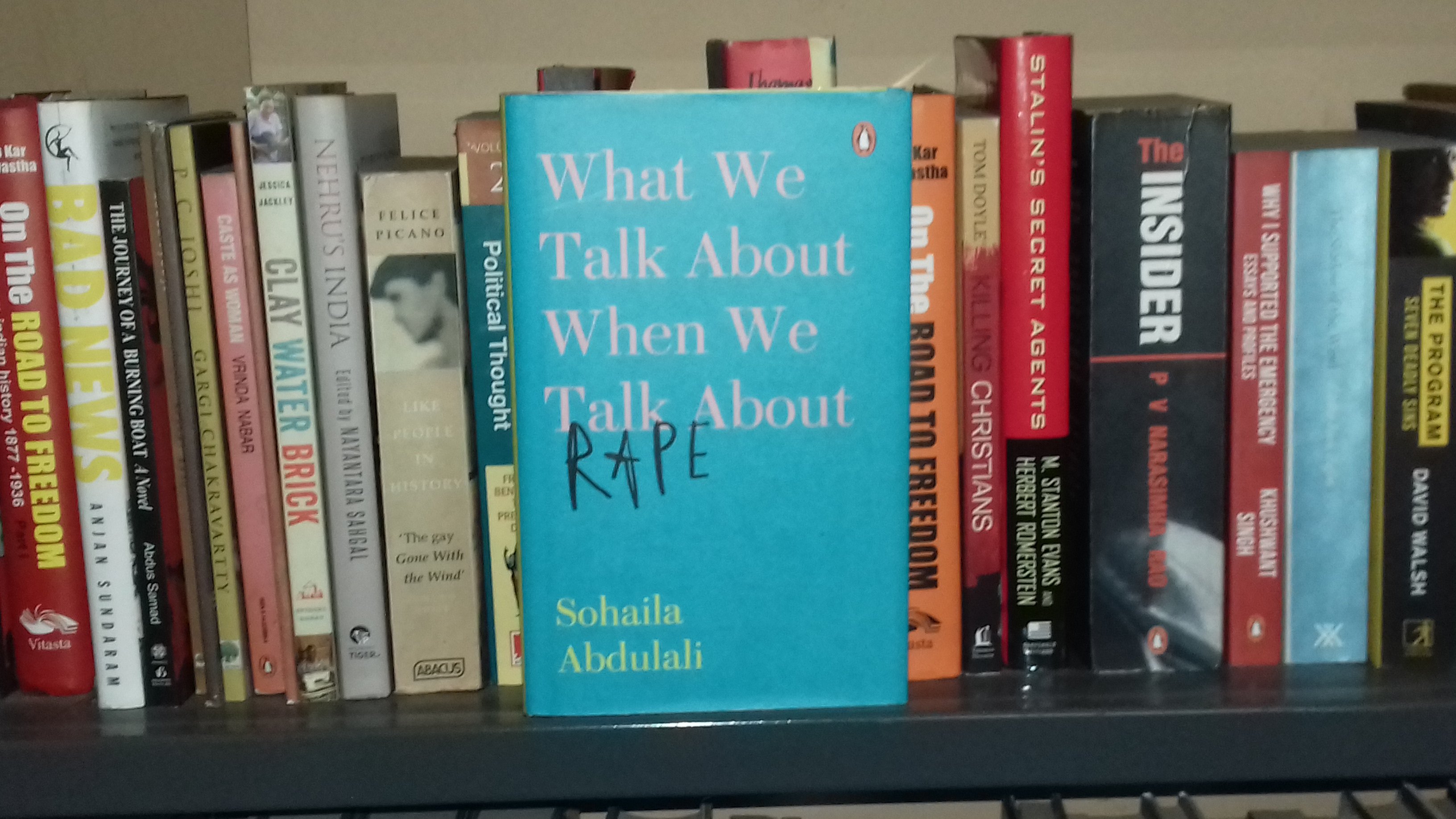 I came to know about Abdulali like most young adults around that time, in 2012, because of the infamous gang rape of Nirbhaya, in New Delhi. Nirbhaya was out with a male friend and boarded a bus full of her rapists, one of whom was a minor. She was tortured and gang-raped on the bus, and a rod was pushed through her vagina damaging many of her organs. She succumbed to her injuries after many days of fierce battle between life and death.

She wanted to live. And why not?

During that time an old article from a woman’s magazine called Manushree started doing the rounds on all social networking sites. It was an article penned in 1983 by Sohaila Abdulali, then just seventeen years old, who was also a gang rape survivor. Someone had dug up Sohaila Abdulali story and had shared it with other internet users. I was touched and inspired by Sohaila’s story. I too shared her story from Manushree on my FB timeline. Little did I know of the pain that Sohaila Abdulali underwent to again have someone dig up old bones and the amount of explaining she had to endure throughout that time especially from people who initially didn’t know she was a gang rape survivor.

When I came across ‘What We Talk About When We Talk About Rape’ in my favorite bookstore Kitab Khana (Fort), I immediately recognized Sohaila Abdulali’s name and bought the book. I read the book in a week because of other bookish and teaching commitments, but it was an experience reading her book.

I realized how social media had brought back terrible memories for her and her loved ones by resurrecting that article again in 2012. But that she took up the challenge of writing about a subject that almost no one, let alone a survivor, wants to talk about is amazing in itself. Because as she says, talking about it means that the pain becomes lesser and awareness is created.

Awareness is created by talking about it; this is something that I have always advocated. Abdulali too supports this method of overcoming the stigma attached to someone who has been raped or sexually abused believing it to be really effective. But that was not the only significant point that I gleaned from this book. There were many, but I would like to dwell here in this blog post only on a few. I hope to be re-reading this book again this year to write a full complete book review and analysis of ‘What We Talk About When We Talk About Rape’ as this book is certainly one of the best books I’ve read this year.

Talking about rape or sexual assault is essential. The book also talks about marital rape which has so many loopholes in Indian law. When I was a mere child in junior school back in the 1990s, I read something about marital rape in a leading newspaper and believe me I couldn’t for the life of me comprehend it. But when I grew up, sense dawned, and now I hate marital rape hoping that our justice system does not overlook the perpetrators of these crimes. But then I remembered my little self in the 1990s; I was quite sure that once you had sex with your husband well then, he can’t rape you, could he? I have grown up, but I think many people, most of them males, haven’t so I do implore them to read this book to understand the one word that holds sexual actions in balance—and that word is consent!

Abdulali very smoothly invites everyone to try and comprehend the meaning of consent and how more often than naught consent is taken for granted, not asked, mistaken, reinterpreted, etc. The example of real survivors that Abdulali has added to this informative book is the best thing she could have done because it shows the various ways women and men are sexually abused, and maybe as they say a forlorn brother or sister out there may take sustenance from the survivor stories and move on.

Abdulali also makes one thing very clear in her book – rape doesn’t define your whole life. Your whole life is not about that assault that you were a victim of. You can still lead a joyful and meaningful life full of other meaningful events that take place in your beautiful rainbow-colored life. Yes, there is anger, fear, forgiveness, shame, silence, but rape cannot define who you are. It can define how you see life and live your life after that, but it was only one painful chapter, don’t make it the title of your book.

I love the casualness of Abdulali in the way she narrates the life of a survivor. I’ve read many books about rape which is filled with anger or which was too theoretical as it was written from an academic point of view. Abdulali’s writing is engaging, light and sometimes a bit funny – I love her way of presenting this book. ‘It’s just rape people, relax but let’s get justice and then reconciliation’ – that’s the way the book is penned.

Rape happens, and we don’t like to talk about it. But Abdulali and her family spoke about it without letting it define her. They thus made her a strong survivor who is here in this book to acknowledge that rape is a part of our culture, and we’ve got to do something to put an end to this. But the first thing we have to do is at least talk about it. That’s the point about the title, the things we don’t talk about when it comes to rape, especially the abuse of a family member. And even if we do tell, will our talking make the victim a survivor or a certified victim forever? These are the questions one comes across in this book.

Abdulali talks like an adult. You will realize that when you read the book, she talks like an adult who knows the pros and cons of being involved in some way or another in a rape. We always act like barbarians on the internet when any girl is raped, always ready to cut off the reproductive organs of the rapists or worse. This book teaches us to start acting like adults. It’s high time we do.

When we hear about a rape case or a gang rape case, we usually are always in denial. This can never happen to me; I’ll never allow this to happen to me. But that means yet again we are clubbing ‘rape’ with things we believe to be ‘not part of social life’ when we need to realize that rape is and has always been part and parcel of social life, culture and has been defining not only the lives of women but also the lives of nations. To rape the women of another nation is to take away the pride and respect of that nation. This has been part of our history for the longest time ever. Such details and many others are mentioned in Abdulali’s book.

Other topics that are discussed in the book are the idea of one rape being not as bad as another, rape and sexual assault across many genders, feminists on rape, government posts being held by sexual abusers which psychologically disturb rape survivors, love, friendship, trust, horror et al.

Fortunately, I have not been a victim of rape, but I have lived in fear of abuse all my life. I’m always on my guard, ever alert, especially when I am travelling alone. Being plus-size also makes me a person who is often the butt of all snide and lewd remarks as I get out of a taxi to get into a shopping mall, a café, a bookshop, etc. This book has given me courage and a lot of inspiration along with topics to ponder on. 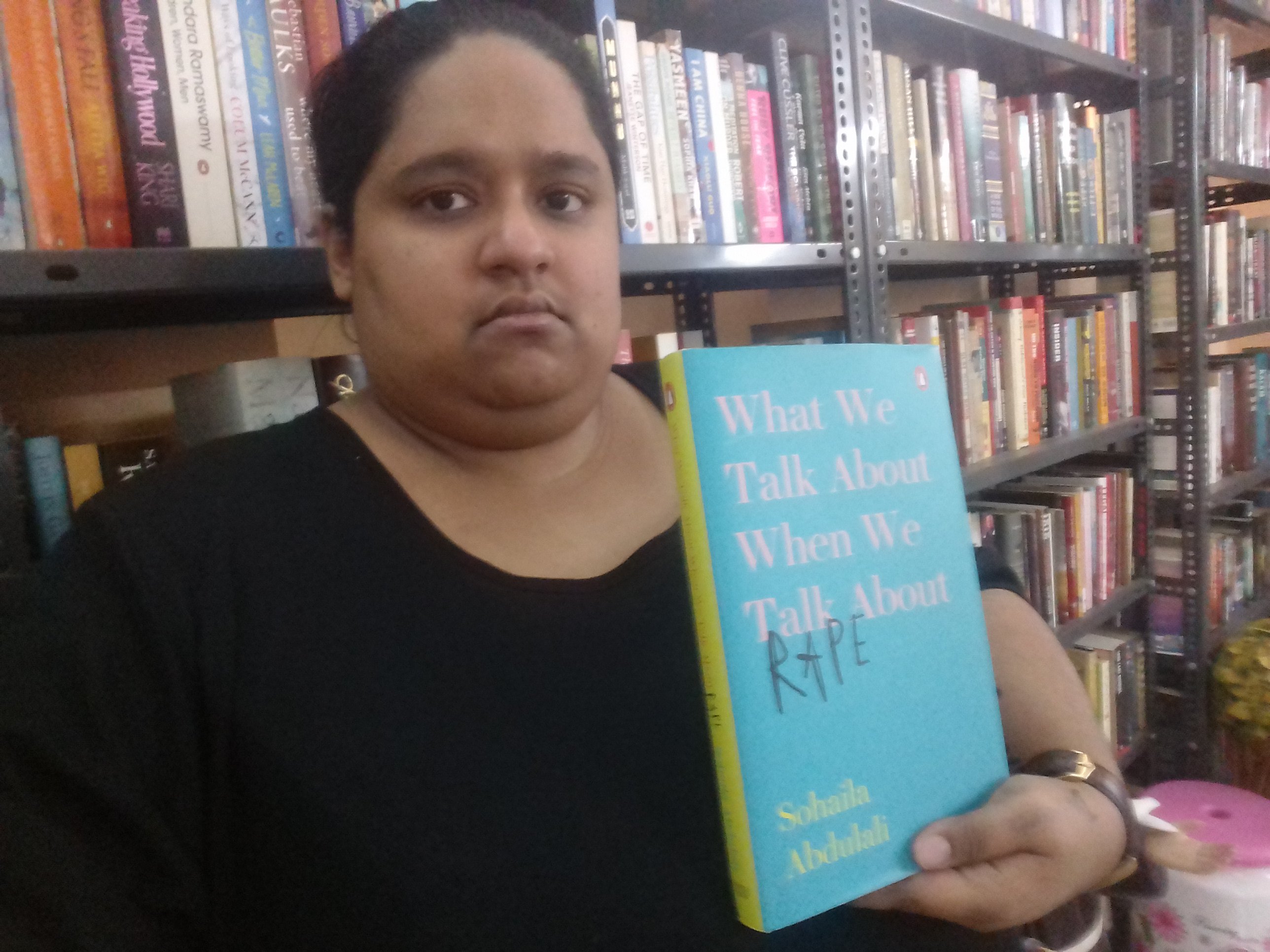 I recommend this book to anyone and everyone. This book is a must-read for survivors and family’s whose lives have been changed because of rape. For social workers, writers, academics, young adults and others who are curious, but who don’t get to talk openly about this topic because of its ‘taboo’ nature, this is the book you should be reading. Sohaila Abdulali is a wonderful writer and meticulous. It’s an enriching experience to read her words, and I think everyone should do so.