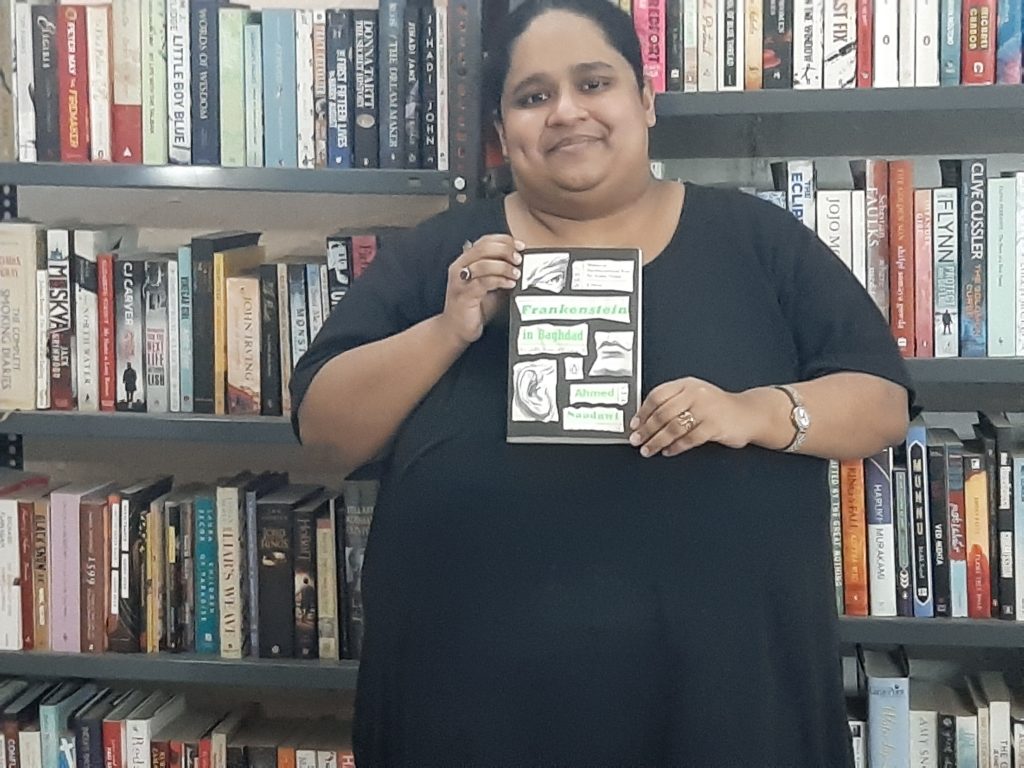 Frankenstein in Baghdad  by Ahmed Saadawi was the winner of the International Prize for Arabic Fiction for 2014 and was shortlisted for the 2018 Man Booker International Prize, reason enough for me to purchase the book from Amazon. I can’t understand why it took me this long to read the book. But yes, last night, I finished reading Frankenstein in Baghdad. What attracted me to the book was the Frankenstein theme, and I am a big fan of Mary Shelley’s eternal classic Frankenstein. I gave Saadwi’s book three stars on Goodreads. The concept was interesting, but I was looking for more from this book. It was a quick read, but I wish the characters had been developed a bit further. The book would have been a masterpiece if the author had managed to lengthen the story.

The story is post-modern Gothic, fantasy, and realistic fiction, all clubbed together, making the book a very different read. Pieces of dead bodies were sewn together by the character Hadi to create something equal to the Frankenstein monster of Mary Shelley’s fame. Hadi did this so that the remains could be seen as a dead body and could receive a proper burial. However, the dead body comes to life and goes on a killing rampage. Hadi’s tale is told along with many subplots. The author makes an appearance in the story, which was nice but nothing novel. Though a page-turner, I was expecting more from it. There were hardly any parallel references to Mary Shelley’s Frankenstein, and maybe that was to the good because the author was trying to convey what it meant to be living in war-torn Baghdad in Iraq.

There is a long monologue when the dead body comes to life that is well written and is something you should look out for. It speaks to the spirit of what it means to be an Iraqi, and it moved me. That was my favorite part. My favorite character in the story was Hadi, the creator of the monster himself. Saadawi beautifully describes the cosmopolitan nature of Baghdad. We see that Iraq is full of religious and ethnic diversity, which is enlightening for those polarized personalities we encounter in our lives who think Iraq is only made up of Shia Muslims. Saadawi deftly paints for us the local settings of his story. I just loved the beginning of the narrative, which describes Baghdad, and the life of Elishva, an Assyrian Christian woman waiting for her dead son to return to her. I also loved the way Hadi is described.

What distracts the mind from the story is the element of riddles in the form of fantasy literature, which is prevalent during the whole story. Many genres are mashed up in this novel. It could have been better handled if the book had been lengthened and if the plot had direction. But these days, it is futile asking for plot-driven stories. Writers are laying aside ‘plot’ and are focusing instead on ‘narrative,’ which is fair enough, as we have entered a world where such techniques are needed to create new storytelling patterns. But yes, the plot could have been looked into in this book.

The narrators in this novel are not reliable, and you can easily get tricked by them, which is cleverly done. This is especially evident in the senior and junior astrologer’s case towards the latter end of the novel. Most of the characters, like Mahmoud, Nawal, Faraj, etc., are realistic and relatable, but not convincing. There is a tendency for the characters to seem a bit faceless and interchangeable, confusing the reader. It did help that there was a list of names at the beginning of the book, which I could continually refer to.

The parallel theme of vengeance is central to the story, especially the vengeance of the monster. The monster represents Iraq, especially Baghdad. He sews different body parts of soldiers, bomb victims, criminals, terrorists, policemen, etc., to himself and takes on their agenda to kill or destroy their enemy. Every person who is a criminal or a traitor to Baghdad is also a victim. That is what the monster in Baghdad realizes, and these are the most haunting and moving parts in the story. I would have loved to read more of what the monster did and how he exacted his vengeance, but Saadawi drifts too quickly to the subplot of Nawal and Mahmoud’s love affair, which I don’t think should have been given so much attention. I am aware of the striving spirit and the many broken pieces of distressed Iraq and Baghdad. The book would have been better if the author had stuck to the above plot, which was a strong plot, and then briefly dwelt on the other characters’ lives.

I want to remind everyone that this is my subjective viewpoint and that I have not penned this review to hurt anyone’s sentiments. I felt the novel had shortcomings, and I am not going to lie about it. It has a very novel concept that could have been developed better and a decently good narrative. It is not a ‘fun read’. It is a serious topic about a political and military crisis that should be treated with seriousness. Those of you who like realistic fantasy fiction will enjoy this book.

I hope to read more of Saadawi’s books soon. He is a good writer, and I would love to read his longer fiction works. I would love to read more books about Iraq. I have a vast library of Middle-eastern non-fiction books, especially about the situation in Iraq stacked in boxes in my office-cum-writing hut where I spend my time in solitary confinement. To know more about my life in books and with books, you can check out my memoir on Amazon titled Scenes of a Reclusive Writer & Reader of Mumbai. If you want a shorter memoir of my life, you can check out The Reclusive Writer & Reader of Bandra.